Great Britain is a tale of four countries – England, Scotland, Wales & Ireland. Any traveler looking for castles and cathedrals, 'olde' pubs, rolling hills and a sense of history permeating the country won't be disappointed. For a cosmopolitan touch visit London and rock and roll fans don’t miss a trip to Liverpool – the home of the Beatles. In Ireland enjoy amazing natural landscapes to explore, with ancient myths and legends waiting for you to uncover.

Some of the best things to do in Britain & Ireland include – sightseeing of all London’s major attractions including Buckingham Palace, Tower of London, Westminister’s Abbey. Visit Edinburgh’s mighty castle to admire Scotland’s Crown Jewels. Travel to Braemar, home of the Royal Highland Games for the past 900 years; and Royal Deeside, where the Queen is an annual visitor. Visit the Highland capital of Inverness before driving to the beautiful Isle of Skye. Enjoy the highlights on the way to Glasgow - Ben Nevis, Glen Coe, and the Bonnie Banks of Loch Lomond! Our budget holiday packages to England, Scotland, Wales & Ireland offer a wealth of experiences in scenic landscapes, majestic architecture, and rich cultural traditions to treasure. Explore Cosmos’ Britain & Ireland vacation packages now!

Holiday packages to Italy with best prices
*Price in US Dollars TRAVELING TO BRITAIN & IRELAND FOR THE FIRST TIME?

With Britain & Ireland’s most impactful history, myriad cultures, and world famous landmarks, Cosmos will help you in deciding where to go, when to go, how long to stay, and how to get the most out of your holiday to the United Kingdom.

Start your planning by first deciding on the total time you have to get away. And are you looking at this trip as your “once in a lifetime chance” to see it all? If so, make room for at least ten days. Or is it a true starter vacation to get a taste of this beautiful region of Britain & Ireland before a return trip or two? In that case, one week is our minimum recommendation. If you only have a short amount of time to get away, plan to visit just one major destination. Choose between some of the most popular British, Scottish and Irish cities, or you may prefer a leisurely vacation just to one of these regions.

Top Things to Do in Britain & Ireland

Scenic Beauty: England, Scotland, Wales & Ireland are littered with the most breath-taking landscapes. With stunning coastline, awe inspiring cliffs, emerald green vistas, deep lakes, craggy mountains and windswept moors, the beauty of this region will makes you instantly fall in love with it. Cliffs of Moher, Isle of Skye, Ring of Kerry, Lake Windermere are just some of the jewels in this spectacular area.

Literature & Poetry: Some of the World’s most famous authors, story tellers and poets are from this part of the world. From Shakespeare to John Milton to Jane Austen to William Blake, they have captivated all of us with their rich contributions to the world of Literature & Poetry. Stratford Upon Avon, the birthplace of Shakespeare, is a must-do site when you go to England.

Theatre: London’s theater scene rivals that of New York’s Broadway, so be sure to catch a show.

Shopping:From high end luxury to the flea markets and everything in between, multiple shopping options are available for travelers going to Great Britain and Northern Ireland. At every city, you’ll be welcomed either by the window displays of leading international brands, modern designer shops and traditional shops that have been there since time immemorial.

Britain and Ireland are largely summer destinations, in terms of weather. Hence, the peak travel period is June to August. Travelling earlier or later to avoid the holiday rush is a good idea. Having said that, they are year-round destinations as they have a different charm in each season, depending on the experience you are looking for. If traveling during the summer, the weather is warmer and the days stay light longer, so you can see more. However, if you want to escape the crowds and see what locals are like in their everyday lives with fewer tourists, the off-season may be the best time to go. November or January to March offer lower rates with the same opportunities for theater, restaurants, stores, and museums. Make sure to check attraction hours, as many have reduced hours and days. May is a good time to travel, since it is warmer but not quite at the height of tourist season for others in the world.

This chart should give you a good idea of the type of temperatures you can expect. Temperate in Degree Celsius

These countries are the perfect destination to visit throughout the entire year, since they have largely a temperate climate. Each season is charming in its own way and offers a distinctive flavour of the city at different times through the year. However, if offered a choice, we recommend traveling in summer, since the days are longer and warmer. It is important to keep in mind that the region’s weather is a bit unstable. So, even if you find clear blue skies in the morning, it may get cloudy and rain several times throughout the same day, while alternating between sunshine and rain. Always keep an umbrella handy with you.

English is widely spoken through United Kingdom. However, you will be surprised to know that English is not the actual official language of this region. English is the defacto language used by all, but it is more by usage than by law that it is the official language. Other than English itself, Welsh is spoken in Wales, Gaelic & Scots in Scotland, Irish in Ireland and Cornish in Cornwall. Due to this, the accents of various regions seem vastly different and might sometimes sound like you are hearing a totally different language.


“MUST SEES” OF BRITAIN AND IRELAND

No matter who or how well traveled you are, seeing the main sites in each city is a “must.” Here are a few standout sites that make the destination unique and present great photo ops.


Have questions about Britain and Ireland Tours? Talk to an expert now!

Breathtaking, lush landscapes combined with vibrant cities and historic attractions—all of this and more await you on this guided Ireland tour, including Northern...Read More

7 Day Tour from Glasgow to Glasgow

Take a journey into the fabled land of adventure on this affordable vacation in Scotland. From the elegant Georgian squares and 12th-century cathedral in Glasgow,...Read More

9 Day Tour from Dublin to London

Stunning scenery, pretty villages, ancient sights, and exciting cities—this Britain and Ireland tour offers all of this and more. Your tour starts in Dublin,...Read More 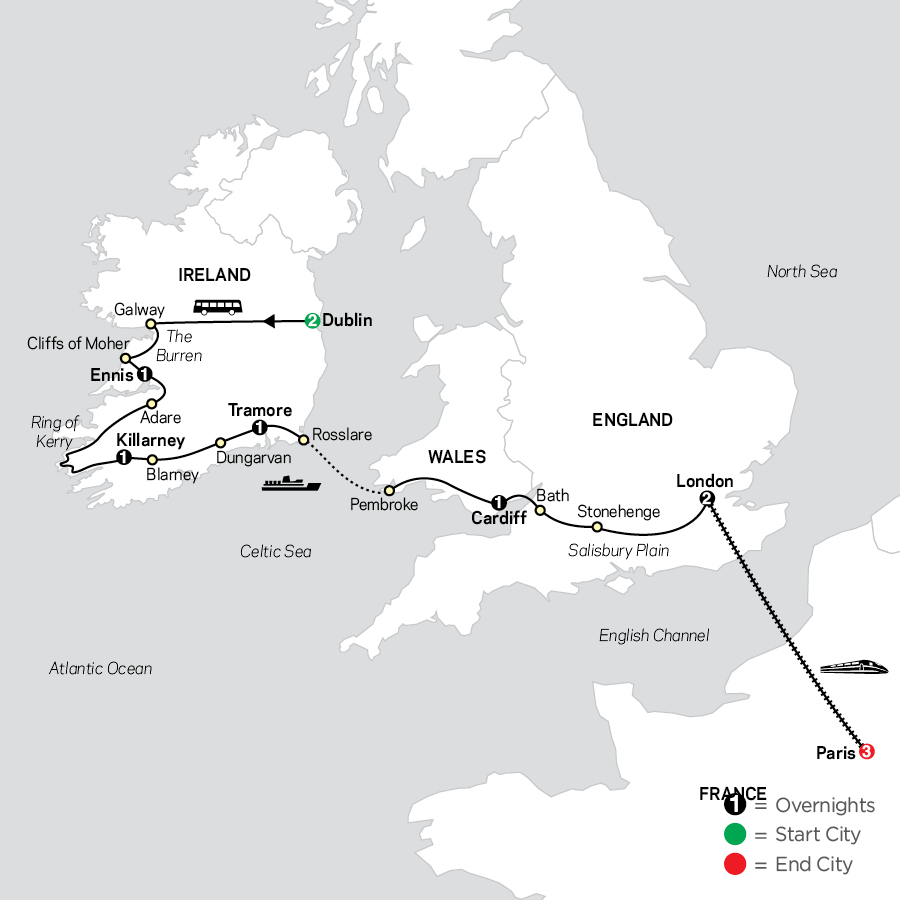 From Dublin to London with Paris(904E)

12 Day Tour from Dublin to Paris

13 Day Tour from London to London

Experience some of Britain’s fascinating towns as you travel through England, Scotland, and Wales, stopping for overnights in London, Leeds, Edinburgh, Strathpeffer,...Read More 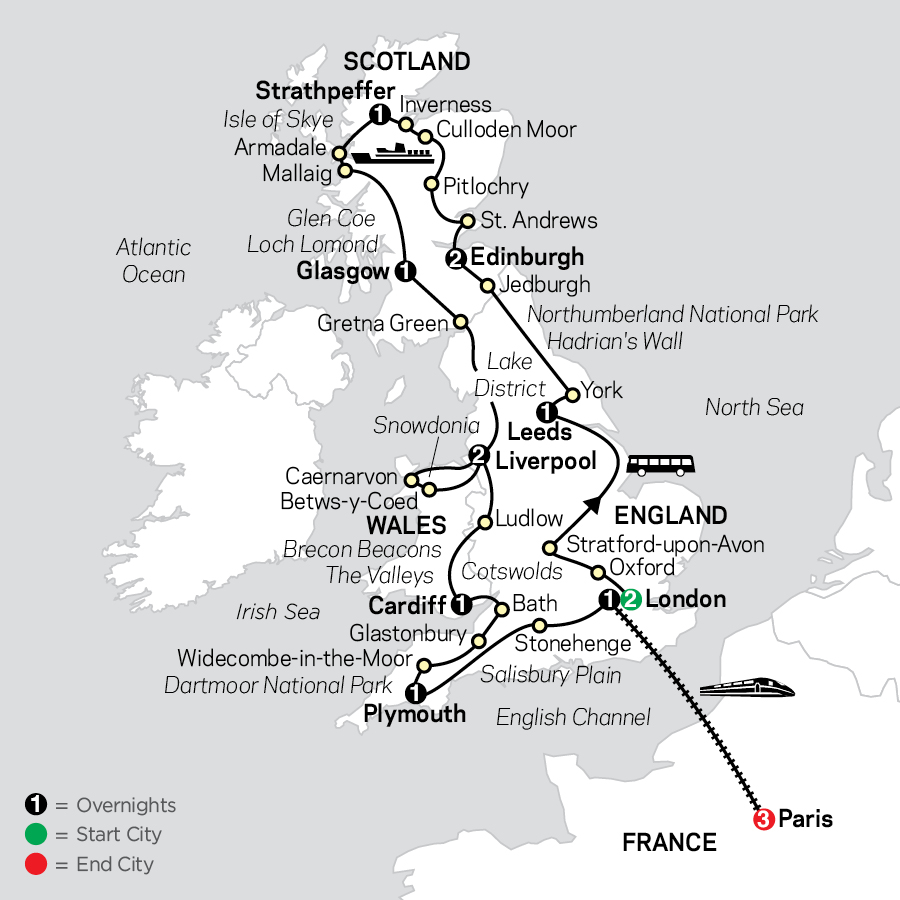 16 Day Tour from London to Paris

15 Day Tour from London to London

On this Best of Britain & Ireland tour, see Britain’s and Ireland’s highlights—from the bustling cities to the small towns and from the breathtaking scenery...Read More

18 Day Tour from London to London

Experience the best of England, Ireland, Scotland, and Wales on this in-depth exploration tour of the British Isles. In between time in the major cities—London,...Read More

23 Day Tour from London to London

From the lively cities to the breathtaking scenery, you’ll discover the best of England, Scotland, Wales, Ireland, and Northern Ireland on this in-depth Britain...Read More

12 Day Tour from Dublin to Edinburgh

Discover the treasures of Ireland and Scotland on your affordable tour from Dublin to Edinburgh. In Dublin’s fair city, you’ll drive along the statue-lined...Read More

12 Day Tour from London to Rome

From London to Rome, travel to Western Europe’s most famous cities on this affordable European tour. Along the way, visit celebrated cities as well as picturesque...Read More

16 Day Tour from London to Paris

Experience some of Britain’s fascinating towns as you travel through England, Scotland, and Wales, stopping for overnights in London, Leeds, Edinburgh, Strathpeffer,...Read More

10 Day Tour from London to Paris

If you want to see Western Europe’s main highlights but don’t have much time, this European tour is the vacation for you! Visit England, Belgium, Germany,...Read More 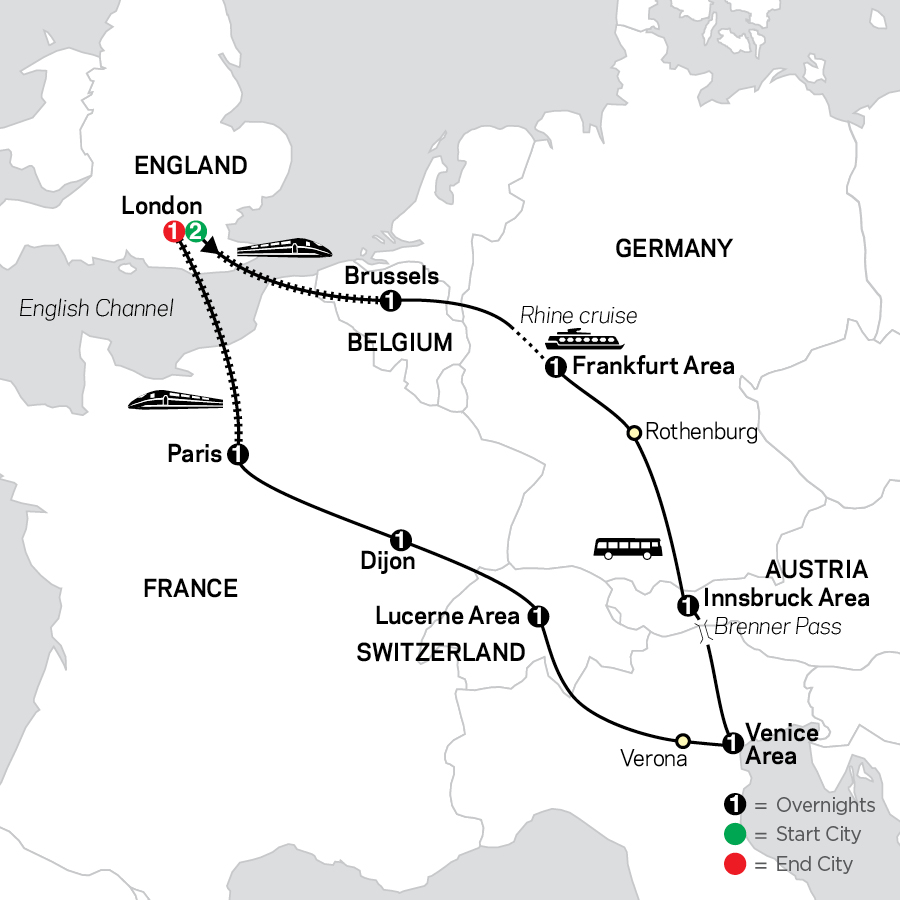 11 Day Tour from London to London

At Globus, we create first-class escorted tours with just the right balance of included features & free time. We’re all about hidden gems, not hidden charges. We throw in more visits, toss in more experiences & include more sightseeing.

Avalon Waterways sets the standard in river and small-ship cruising by offering you the best views in river cruising. Avalon has the newest fleet, the most included shore excursions, the widest range of choices and extraordinary itineraries.