The Best of Brazil & Argentina with Brazil’s Amazon & Uruguay (1008)

15 Day Tour from Manaus to Montevideo

The Best of Brazil & Argentina with Brazil’s Amazon & Uruguay

15 Day Tour from Manaus to Montevideo

On this tour, discover some of South America's fascinating cities—Rio de Janeiro, Buenos Aires, Montevideo, and Manaus—along with Brazil’s Amazon. Rio de Janeiro is an exciting city known for its beautiful beaches, vibrant atmosphere, gorgeous scenery, and welcoming people. On your guided sightseeing tour of Rio, take the cog railway 2,300 feet up to the summit of Corcovado to view the infamous Christ the Redeemer statue and to enjoy 360-degree views. Also have the chance to eat at a famous local churrascaria and enjoy a free day to explore on your own. Buenos Aires is known as the "Paris of South America" with its wide boulevards, outdoor cafés, and charming shops. Here, your sightseeing with a Local Guide includes the city's landmarks and Recoleta Cemetery, where Eva Peron is buried. You’ll also enjoy a Tango show and a free day to explore Buenos Aires on your own. In Uruguay, enjoy guided sightseeing in Montevideo and in the colonial city of Colonia del Sacramento, a UNESCO World Heritage Site founded in 1680. A highlight of this South America tour is Iguassu Falls, one of the most spectacular sites in the world! Just imagine the thundering roar of the 275 waterfalls spanning almost two miles wide! See the brilliant rainbows created by clouds of spray and stand mesmerized on both the Brazilian and Argentine sides of the falls. You'll even take the ecological jungle train through the rainforest on the Argentine side. But that’s not all…also enjoy Brazil’s Amazon. Stay inside the Amazonian rainforest, cruise on the river, enjoy Naturalist-guided walks to see the flora and fauna, and spend time in an Amazon village learning about the local way of life. From the vibrant cities to the spectacular scenery, this South America tour is the perfect vacation for value-minded travelers!

*Book a select 2021 Cosmos vacation to receive the $50 per person discount on the land price. Booking must be made, under deposit and discount applied between March 19 - July 31, 2020 for travel in 2021. Discount will apply to individual members of groups adding a name and non-refundable per person deposit WITHIN the promo window. Not applicable on TBA space. Not applicable to custom tours. Combinable with all other applicable promotions. Applies to new bookings only and offer will not be applied to pre-existing bookings. Offer reliant on space availability. Full cancellation penalties will apply. Additional restrictions may apply; see Travel Terms & Conditions for details. May be withdrawn at any time. PRMX0579 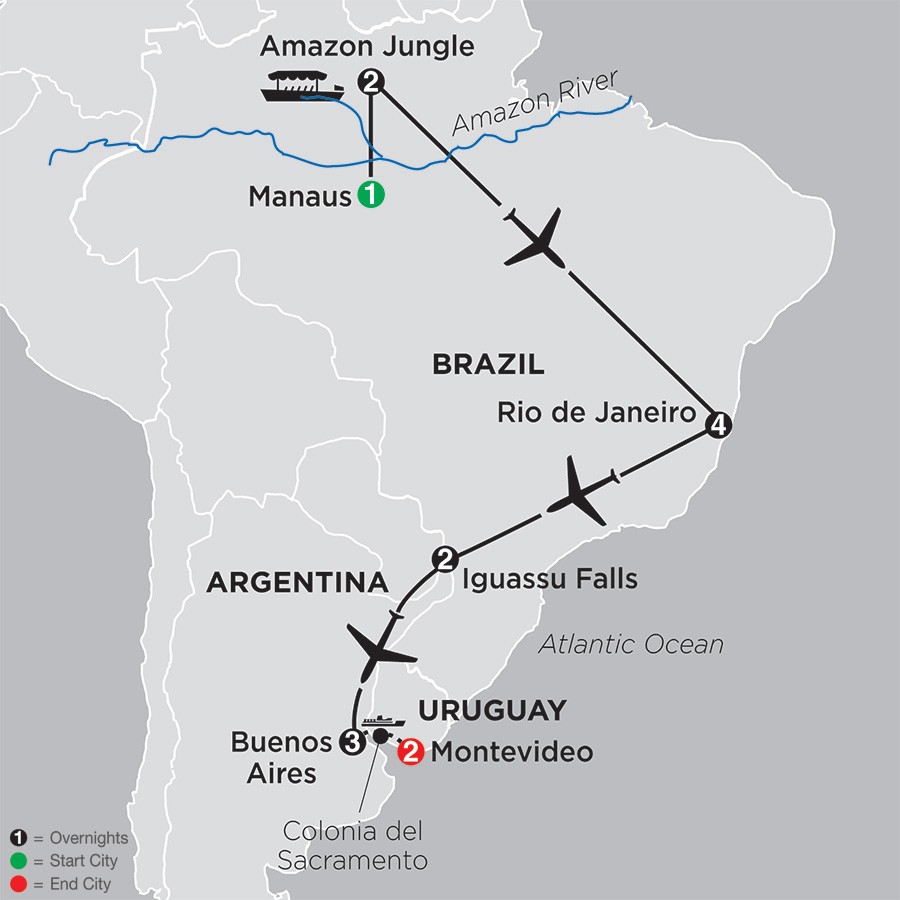 MANAUS, BRAZIL. Welcome to the capital of the Amazonas region where you will be met by a Cosmos representative. Located in the dense Amazon Jungle area, Manaus preserves images of its opulent past and is still a major port—even 1,000 miles inland!

MANAUS–AMAZON JUNGLE. Floating past the clustered huts of locals living on the banks of the river, cruise down the Rio Negro to the MEETING OF THE WATERS. Marvel at the confluence of the dark-colored Rio Negro and the light chocolate-colored Rio Solimões, where the two rivers come together to form the mighty Amazon. For four miles, these two bodies of water flow side by side before they mix together. Later, disembark at a JUNGLE ISLAND (water level permitting) with fascinating native flora and fauna. This afternoon, arrive at the Ecopark Jungle Lodge on the banks of the Rio Negro inside the Amazonian rainforest. (B,L,D)

AMAZON JUNGLE. Enjoy a Naturalist-guided WALK to see the flora and fauna that thrive in the Amazon. After lunch, sail up the river to visit an AMAZON NATIVE CABOCLO VILLAGE to learn about their traditions, costumes, and culture. Also, try your hand at piranha fishing! Later, visit the MONKEY JUNGLE RESERVE, where researchers work to rehabilitate primates like spider, squirrel, woolly, and capuchin monkeys and reintroduce them into the jungle. This evening, venture back out on canoe with your Naturalist to appreciate the sounds of the jungle at night and look for small alligators (and other night creatures). (B,L,D)

AMAZON JUNGLE–RIO DE JANEIRO. This morning, depart the Ecopark for a Manaus city tour featuring the famous OPERA HOUSE, completed in 1896 after 15 years of construction, and a LOCAL MARKET. Continue to the airport for your flight to Rio.

RIO DE JANEIRO, BRAZIL. Welcome to spectacular Rio de Janeiro, home to white-sand beaches and host of the 2016 Summer Olympics! Settle into your hotel and meet your Tour Director, who will have pointers for your free-time exploration.

RIO DE JANEIRO. Sprawling between majestic granite peaks and the blue South Atlantic, Rio is a city of beauty, wonder, and energy. Guided sightseeing with a Local Guide begins with a drive along Rio’s famed Leblon, Ipanema, and Copacabana beaches. Take the cog railway 2,300 feet up to the summit of CORCOVADO to view the famous Christ the Redeemer statue and enjoy 360-degree views of Guanabara Bay and the bustling city below. Your afternoon is free to explore—perhaps join an optional excursion to a nearby favela for a glimpse into the life of these colorful communities that nearly 20% of the people call home.

RIO DE JANEIRO. A free day in Rio allows you to relax on one of the famous beaches or take an optional excursion to the historic city of Petropolis to see the former summer palace of Emperor Pedro II.

RIO DE JANEIRO–IGUASSU FALLS. A morning flight takes you to IGUASSU FALLS, one of the greatest natural wonders of the world. Upon arrival, journey to the Brazilian side of the falls to see the mammoth series of 275 waterfalls cascading over a precipice almost two miles wide and 250 feet deep. Walk into Devil’s Throat Canyon, where the clouds of mist, thundering roar, and 180-degree rainbows surround you—an unforgettable experience!

IGUASSU FALLS. Cross the border for a visit of the Argentine side of IGUASSU FALLS. Begin with a short ride on the open-air ECOLOGICAL JUNGLE TRAIN through the rainforest. A series of boardwalks takes you above the falls to see the water crashing down into the Devil’s Throat. Your afternoon is free to explore, or you may opt to visit the Bird Park, home to many species of endemic birds, as well as flora from the area.

IGUASSU FALLS–BUENOS AIRES, ARGENTINA. Transfer to the airport for your flight to Buenos Aires, Argentina’s cosmopolitan capital. After settling into your hotel, an orientation tour familiarizes you with the “Paris of South America” and its wide boulevards, outdoor cafés, and charming shops.

BUENOS AIRES. Morning sightseeing with a Local Guide focuses on the city’s landmarks, including the Teatro Colón Opera House and Plaza de Mayo, site of La Casa Rosada (the President’s Pink House), and Metropolitan Cathedral. Also, visit La Boca and San Telmo, one of Buenos Aires’ oldest neighborhoods, and RECOLETA CEMETERY, where Eva Perón is buried. End your day with an Argentinean meal, followed by a sensuous TANGO SHOW highlighting the alluring dance that is so popular here.

BUENOS AIRES. Today is free for independent activities, or you can take an optional excursion to visit a local estancia (ranch) to experience the life of the gauchos (cowboys), as well as traditional dance performances and a barbecue lunch.

BUENOS AIRES–COLONIA DEL SACRAMENTO, URUGUAY–MONTEVIDEO. Board a high-speed catamaran bound for the UNESCO World Heritage Site of Colonia del Sacramento, Uruguay. Your Local Guide takes you on a guided tour of this colonial city founded by Portuguese settlers in 1680. Later, board a bus for Uruguay’s capital city, Montevideo.

MONTEVIDEO. On a city tour of Montevideo, drive along the Atlantic Coast to the city center and visit Constitution Square, the cathedral, the colonial Town Hall, and Independence Square. Other areas visited include the Prado area, Batlle y Ordoñez Park, the residential area of Carrasco, and Plaza Virgilio.

MONTEVIDEO. Your vacation ends after breakfast this morning. 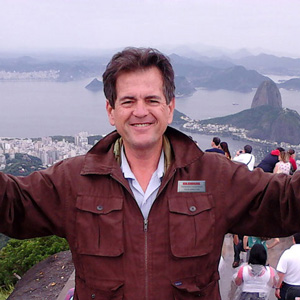