PROTESTANT ITINERARY Reconnect spiritually on this biblical tour of Israel starting from the modern Israeli capital of Tel Aviv and ending in the ancient city of Amman in Jordan. This journey will lead you to the holy places mentioned in the Old Testament and into the footsteps of Jesus as you hear and learn the stories about his ministry, his miracles, and his life. Visit some of the most cherished biblical sites: Megiddo, Tiberias, Nazareth, the valley of the Jordan River, where you can be baptised on select departures, and Bethlehem. Collect in prayer and learn about an ancient culture in the company of like-minded fellow travelers; this experience will bring a new spark to your faith and life. Complete the journey with an extension to fascinating Jordan, where you’ll visit more faith-related sites, like Mount Nebo, but also one of the most inspiring places on earth: the spectacular sandstone city of Petra. 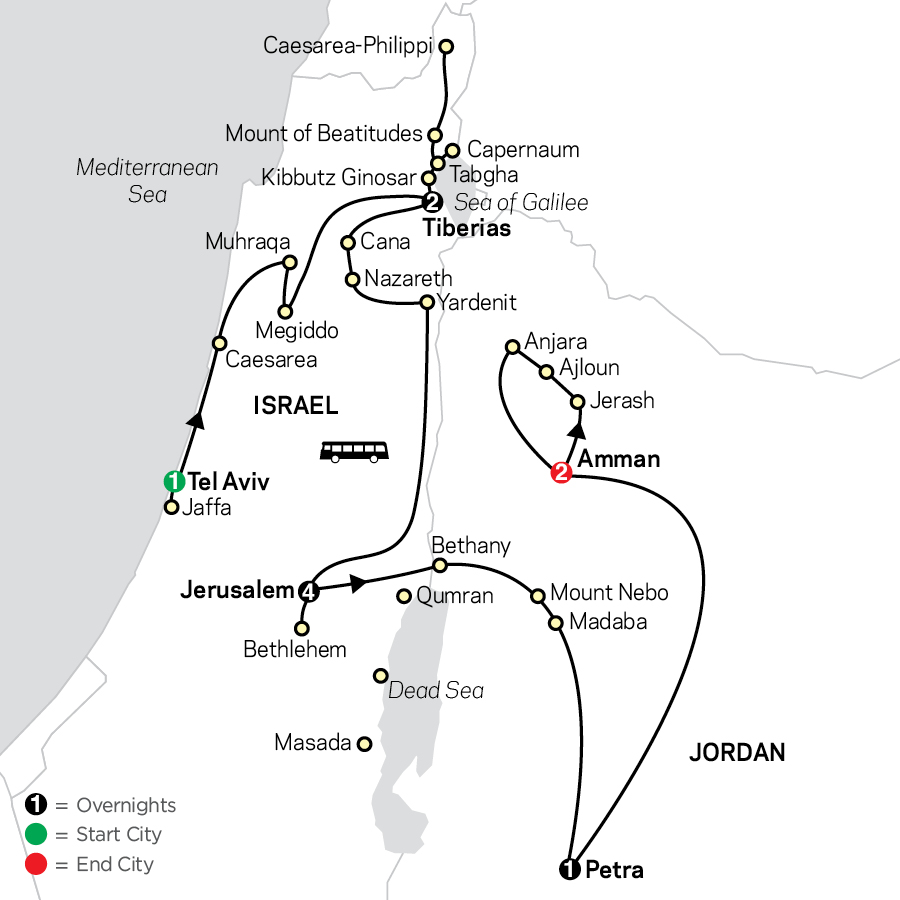 
Services of a professional Tour Director while touring


Transfers by private, first-class, air-conditioned motorcoach. Boat trip on the Sea of Galilee.

ARRIVE IN TEL AVIV, ISRAELWelcome to Israel! Check into your hotel, then this evening, meet your Tour Director and fellow travelers.

TEL AVIV–JAFFA–CAESAREA–MUHRAQA–MEGIDDO–TIBERIAS Leave Tel Aviv and visit the old port of Jaffa. Sightseeing continues at Caesarea, an ancient port turned stunning archaeological site. Admire the restored 3,500-seat Roman theater, the aqueduct, the harbor, the stadium and the crumbled moat and towers from the 12th-century Cruisader frotress. Next, visit Muhraqa on Mount Carmel, site of Elijah’s contest of faith with the priests of Baal. From here, travel to the archaeological site of Megiddo, an age-old fortified town and site of the Battle of Armageddon in the End Times, according to the Bible. Stay overnight in the lakeside city of Tiberias. Today's Distance: 117 mi / 188 km

TIBERIAS. EXCURSION TO KIBBUTZ GINOSAR, CAPERNAUM, MOUNT OF BEATITUDES, TABGHA & CAESAREA-PHILIPPIToday, travel to Kibbutz Ginosar to visit the Jeus Boat Museum, followed by an included cruise on the Sea of Galilee. Next, visit Capernaum and see its ancient Synagogue and the house of St. Peter. Spend some time meditating at the Mount of Beatitudes, where Jesus delivered his famous sermon, and continue to Tabgha to visit the Church of the Multiplication, where Jesus fed 5,000 people with two fish and five loaves. On to Caesarea-Philippi (Banias), location of one of the springs of the Jordan River, where Jesus taught his disciples. Today’s Distance: 31 mi / 50 km

TIBERIAS–CANA–NAZARETH–YARDENIT–JERUSALEMThis morning, stop in Cana, site of Jesus’ first miracle when he turned water into wine at a wedding. Continue to Nazareth and visit the Church of the Annunciation, St. Joseph Church , and the old village. Leave the Galilee area, drive through the Jordan Valley, and visit the Yardenit Baptismal site (departures April 1 to September 2 include Baptism ceremony), then ascend the Judean Mountains to Jerusalem, with a stop at a viewpoint overlooking the Old Town. Today's Distance: 144 mi / 231 km

JERUSALEM. EXCURSION TO BETHLEHEM Set off on a touching walking tour of Jerusalem’s Old Town. From the Mount of Olives, take in memorable views over the city. Descend via the Palm Sunday walk and visit the Garden of Gethsemane, where Jesus prayed on the night before his arrest. Visit the Church of all Nations, located next to the garden, then enter through St. Stephen’s Gate and arrive at the Pool of Bethesda. Follow in Jesus’ footsteps along the Way of the Cross to the Church of the Holy Sepulchre. Walk through the Jewish Quarter, reconstructed following unification of the city after the Six-Day War in 1967. Stop at Mount Zion to visit King David’s Tomb and the Cenacle—the Upper Room where Jesus and his disciples had the Last Supper. View the unearthed colonnade-style thoroughfare with its ancient marketplace. Travel to Bethlehem, birthplace of Jesus and King David. Visit one of Christianity’s holiest places, the Church of the Nativity, built on the site where Jesus was born. Today's Distance: 10 mi / 16 km

JERUSALEM Today, head for the Southern Wall excavations and visit the Davidson Center, one of the most significant archaeological sites in the country. Continue with a stop at the Western Wall, the holiest place in Judaism today. Next, visit the Garden Tomb and enjoy the beautiful garden, a perfect place for personal reflection and worship. Then, visit the Israel Museumto see the Shrine of the Book and the Dead Sea Scrolls. Later, tour Yad Vashem, the “World Holocaust Remembrance Center.”

JERUSALEM. OPTIONAL EXCURSION TO QUMRAN, MASADA & THE DEAD SEAToday is free to relax, revisit some of the Jerusalem sites at your own pace, or join an exciting optional excursion to the Dead Sea, the planet’s lowest point on dry land. Travel to Qumran with an included visit to the Qumran Caves, where the Dead Sea Scrolls were discovered. Continue to Masada and ride the cable car up to the magnificent rock fortress, on a clifftop above the Dead Sea, where 960 Jewish rebels made their last stand against Roman forces in 73 AD. Later, head for the shores of the Dead Sea, where you’ll have time to experience the incredible buoyancy in the salt water. Return to Jerusalem.

JERUSALEM, ISRAEL–PETRA, JORDANDrive to Allenby Bridge, where you will cross into Jordan and arrive at Bethany beyond the Jordan. On to Mount Nebo, where Moses saw the Promised Land and where he is believed to be buried. Next, travel to ancient Madaba, the “City of Mosaics.” Later, see the spectacular Byzantine mosaics and the precious 6th-century mosaic map of the Holy Land, and visit St.George Church. Today's Distance: 174 mi / 280 km

PETRA–AMMANThis morning, visit the archaeological site of Petra, a UNESCO World Heritage Site and one of the New7Wonders of the World®. Enjoy an unforgettable experience as you walk down the siq, the narrow gorge made famous in “Indiana Jones and the Last Crusade,” and stand in awe in front of the iconic Treasury. This afternoon, travel north to Amman for two overnight stays. Today's Distance: 155 mi / 250 km .

AMMAN. EXCURSION TO JERASH, AJLOUN & ANJARABegin your day with a stop in Jerash, which was inhabited as early as 3200 BC. Although the city was impacted by the earthquake of 749 AD, it is the site of the best preserved Greco-Roman ruins in the Middle East. Travel through beautiful pine forests and olive groves before arriving in Ajloun.This town’s most important feature is a Moorish castle that dominates a wide stretch of the northern Jordan Valley. Next on the agenda is the biblical city of Anjara, where Jesus, his disciples, and the Virgin Mary stopped and rested in a cave as they traveled between Jerusalem and Galilee. Today, the cave is a holy place for pilgrims. Today';s Distance: 155 mi / 250 km