15 days from Toronto to Vancouver

15 days from Toronto to Vancouver

This cross-country adventure across Canada begins in Toronto, ends in Vancouver, and includes beautiful scenery and fun-filled activities in some of Canada’s most popular cities. A highlight of this Canada train tour is the 3-day, 3-night journey on VIA Rail’s® the Canadian—a premier continental train—from Toronto to Jasper. In refurbished art deco rail cars and domed observation cars, enjoy views of the ever-changing landscapes as you leisurely travel through Ontario, Manitoba, Saskatchewan, and Alberta. The spectacular landscapes on your train trip are not the only stunning scenery you’ll witness on this Canada rail tour. Marvel at hypnotic Niagara Falls on your boat cruise past the falls. In the Canadian Rockies, ride the Ice Explorer—an all-terrain vehicle—on Columbia Icefield, an expanse of ice that is 1,200-feet thick. Stop in breathtaking Lake Louise, where cold waters mirror the surrounding mountains and glaciers. Spend time in stunning Jasper National Park—with its rugged mountains, glaciers, alpine meadows, rivers, and abundant wildlife—and Banff National Park, home to majestic mountains and picture-perfect scenery. Also travel through Yoho National Park, with its famous fossils, and Glacier National Park, with its abundant wildlife. From the Pacific Coast, sail to Victoria through the scenic Gulf Islands. In Victoria, visit world-famous Butchart Gardens with its 55 acres of floral displays. Throughout this Canada train tour, enjoy sightseeing in the cities and time to explore on your own. You may want to dine at the top of Toronto’s CN Tower, take an optional float trip on the Athabasca River in Jasper, hike in Banff, enjoy Afternoon Tea at Victoria’s Empress Hotel, or shop Vancouver’s Robson Street. See Canada’s spectacular mountain scenery, stunning lakes, picturesque towns, gentle prairie fields, and exciting cities on this Canadian rail tour—what a fantastic vacation! 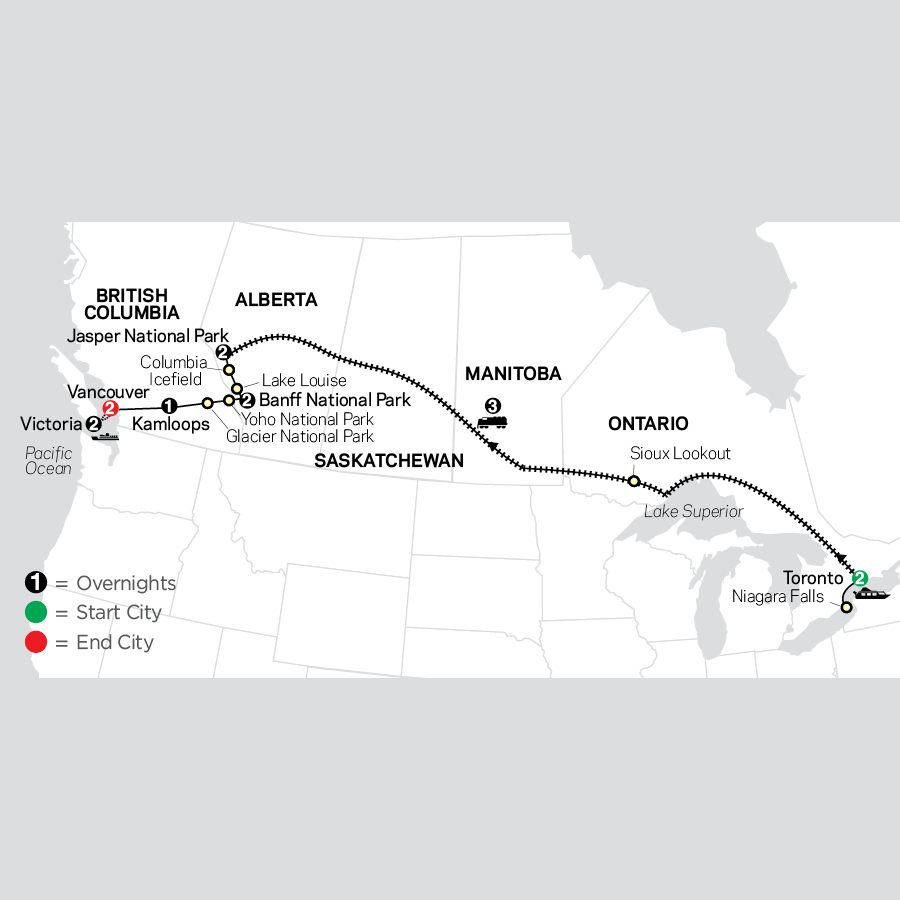 Add an Alaska Cruise to Your Vacation 8965


Private bedroom on VIA Rail’s the Canadian® train from Toronto to Jasper in Sleeper Plus class; ferry crossing to/from Vancouver Island; private, deluxe, air-conditioned motorcoach while touring with free Wi-Fi.

TORONTO Welcome to Toronto! Your Tour Director is on hand late this afternoon to answer any questions..

TORONTO. EXCURSION TO NIAGARA FALLS Leave bustling Toronto and travel along the shores of Lake Ontario to Niagara Falls. Sightseeing here includes the Niagara Falls sightseeing cruise past the world-famous falls. Return to Toronto and enjoy a sightseeing tour that includes City Hall, the downtown banking district, Rogers Centre, and stunning CN Tower—more than a third of a mile high. Spend the evening exploring the city sights on your own, or join the optional outing that combines dinner with the spectacular sight of Toronto’s skyline from the CN Tower.NOTE:Operation of the Niagara Falls sightseeing cruise is subject to favorable weather and/or river conditions. When unfavorable conditions exist, a walking tour through the scenic tunnels will be substituted.

TORONTO–VIA RAIL THE CANADIAN This morning, transfer to Union Station for a departure on The Canadian, VIA Rail’s premier transcontinental train. Spend the next three days and nights on this classic trip across Canada’s heartland. Your Sleeper-Plus class rail cars are refurbished art-deco cars from the 1950s. Domed observation cars let you enjoy views of the Canadian countryside as you roll past Ontario’s landscapes. Chef-prepared meals offer a tempting array of soups, salads, main courses, and desserts. (L,D)

VIA RAIL THE CANADIAN Today, watch the scenery as you whisk by the ever-changing Canadian landscape and travel the full length of the Canadian National Railway’s breathtaking mainline.

VIA RAIL THE CANADIAN The Canadian glides through Winnipeg, before continuing the journey through Manitoba’s prairies and into Saskatchewan.

VIA RAIL THE CANADIAN–JASPER NATIONAL PARK Arrive in Jasper this morning and enjoy an orientation tour of the townsite. The remainder of your day is free to enjoy the ambiance of this delightful mountain setting.

JASPER NATIONAL PARK Consider an optional trip to Maligne Lake for a narrated cruise to much-photographed Spirit Island. On the return journey, stop to view mighty Maligne Canyon. With free time this afternoon, maybe hike on the trails and watch for wildlife, or stroll the streets of Jasper. Perhaps an optional float trip on the Athabasca River to end the day?

JASPER NATIONAL PARK–COLUMBIA ICEFIELD–LAKE LOUISE–BANFF NATIONAL PARK Board your motorcoach this morning and journey through Jasper National Park, stopping along the way at the Columbia Icefield to experience the Ice Explorer, an all-terrain vehicle that travels on ice measuring 750 feet (250 meters) thick. Continue down Icefields Parkway to Lake Louise, where cold waters mirror the surrounding mountains and glaciers. Arrive in Banff National Park for a leisurely 2-night stay. An orientation tour includes Banff’s unspoiled beauty.

BANFF NATIONAL PARK This morning, consider an optional helicopter ride over the Canadian Rockies. The day is free to independently explore this resort town located within Banff National Park. Stroll Banff Avenue, the main thoroughfare of boutiques and souvenir shops. The surrounding 2,564 square miles of parkland are home to wildlife, including elk and grizzly bear. This evening, your Tour Director will suggest an optional horse-drawn wagon ride along scenic trails, followed by a BBQ Steak dinner.

KAMLOOPS–FERRY CROSSING–VICTORIA As you travel through the Coast Mountain Range to its majestic Pacific coastline, the vegetation changes from desert landscape to lush alpine forest. Board your afternoon ferry for the spectacular crossing to Vancouver Island. Sightseeing in Victoria includes the world-famous Butchart Gardens, the Inner Harbour, Bastion Square, and Thunderbird Park. This evening, consider strolling along the Waterfront Promenade.

VICTORIA Be sure to discover some of the attractions this splendid city has to offer, including the Royal British Columbia Museum, Afternoon Tea at the Empress Hotel, a whale-watching cruise on the Strait of Juan de Fuca, and fine shopping along Government Street.

VICTORIA–FERRY CROSSING–VANCOUVER This morning, set sail across the Strait of Georgia and through the spectacular Gulf Islands, an archipelago known for its Mediterranean-like climate. In Vancouver, city sightseeing includes Stanley Park, Gastown, Chinatown, and many other famous landmarks. The remainder of the day is free to explore Robson Street and experience British Columbia’s premier shopping and entertainment location.

VANCOUVER Your vacation ends this morning.

"Growing up in a family hotel business, I have interacted with the traveling public since I was a child. I have over 35 years of experience in the travel industry and have guided tours in Canada and Europe since 1996. After living in Denmark and traveling the world, I currently call Halifax, Nova Scotia home and it is my privilege to share this beautiful country of Canada, both the east and west coast, with visitors from around the world." 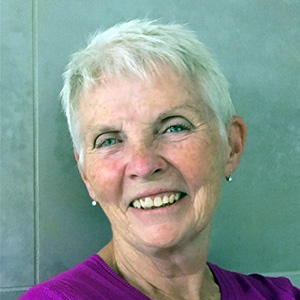