Embark on a South America exploration with a two-week cruise! You’ll board your cruise ship after two nights in the exciting city of Buenos Aires, to travel by sea to visit some of the continent’s most remarkable locales. Your ports of call include destinations in Uruguay, Argentina, Chile, and the Falkland Islands. Witness the wildlife of the gateway to remote environments and Argentine Patagonia; see stunning landscapes of the Falklands with penguins on shore of the coastal town of Port Stanley; and cruise around Cape Horn at the end of the world—where the Atlantic and Pacific Oceans meet. Other once-in-a-lifetime adventures include your journey to Tierra del Fuego and the Beagle Channel—named after the first ship to explore the region. You’ll cruise the Strait of Magellan and through the Chilean fjords, passing icebergs, glaciers, and Andean peaks. Your odyssey carries you to Patagonia’s Lake District with some of the Earth’s most breathtaking scenery. Your affordable South America vacation concludes in sophisticated Santiago to enjoy the vibrant city at cruise’s end. 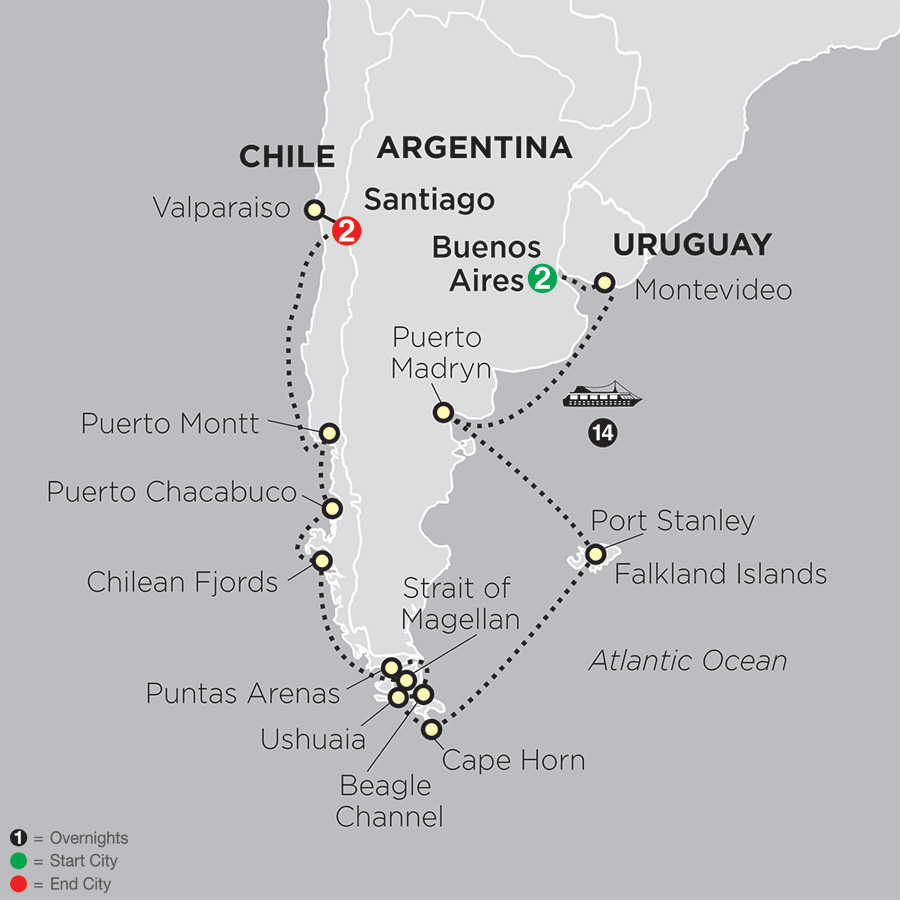 BUENOS AIRES, ARGENTINA. Welcome to the capital of Argentina! This cosmopolitan city with a great European cultural influence has managed to preserve its old traditions and charming corners. Upon arrival, you will be met by your Tour Director, who will help you check into your hotel.

BUENOS AIRES. Begin your Buenos Aires CITY TOUR with a drive on the widest avenue in the world, 9 de Julio, passing the famous Colon Theatre, Plaza de Mayo, La Casa Rosada (the President’ s Pink House), and the first City Hall, which was built during Spanish rule. Visit the METROPOLITAN CATHEDRAL, where Pope Francis celebrated Mass when he was Cardinal of Buenos Aires. Also see the mausoleum of General San Martin, Argentina’s national hero. Stop in San Telmo to explore one of the oldest neighborhoods in Buenos Aires before continuing to La Boca with its colorful Caminito Street. End today’s tour in the glamourous Recoleta district, home to elegant boutiques, distinguished restaurants, and RECOLETA CEMETERY. See one of the most impressive monuments in Argentina, the mausoleum of Eva Perón, also known as Evita. Tonight, enjoy dinner and drinks before your professional TANGO SHOW begins.

CRUISING: MONTEVIDEO, URUGUAY. Resting on the southernmost point of the Rio de la Plata, Uruguay’s capital is a charming city. Perhaps tour the Establecimiento Juanico winery with buildings dating back to 1849, wander the Plaza Independencia or take in the scenery at Estancia La Rabida. (B,L,D)

CRUISING: PUERTO MADRYN, ARGENTINA. Puerto Madryn is a gateway to remote wildlife preserves and Argentine Patagonia. If you want to see wildlife, go to the Punta Tombo Nature Reserve where a large colony of Magellan penguins can be found. (B,L,D)

CRUISING: PORT STANLEY, FALKLAND ISLANDS. Arrive in the capital of the Falkland Islands—Port Stanley—an off-the-beaten-path coastal town with stunning landscapes. This quaint city may be home to a small population, but it’s big on things to see and do. Consider visiting the Anglican Christ Church Cathedral, the southernmost cathedral in the world, or the Historic Dockyard Museum. Perhaps, spend free time on the lookout for penguins near the shore. (B,L,D)

CRUISING: CAPE HORN. Grab your camera and a great seat on deck for cruising around the world famous Cape Horn at the “end of the world” where the Atlantic and Pacific Oceans meet at the southern tip of South America. (B,L,D)

CRUISING: USHUAIA, ARGENTINA & BEAGLE CHANNEL. Arrive in the southernmost city in the world, Ushuaia, located on the island of Tierra del Fuego. Once a secluded outpost and penal colony, today Ushuaia is a thriving community for timber, fishing, and tourism. You may opt to visit nearby Tierra del Fuego National Park before cruising the Beagle Channel this afternoon. The channel is named after the HMS Beagle which was the first ship to explore the area and had among its crew a then unknown naturalist by the name of Charles Darwin. (B,L,D)

CRUISING: PUNTA ARENAS, CHILE. From the original name “Sandy Point,” Chile’s southernmost capital city had its humble beginnings as a sparse penal colony near the Straits of Magellan. Today, Punta Arenas’ prosperity is fed by its strategic location as a gateway to the Antarctic Peninsula and the wool industry. (B,L,D)

CRUISING: CHILEAN FJORDS & PATAGONIA CHANNELS. Today finds you in the isolated and remote Chilean fjords for a relaxing passage through some of nature’s most stunning vistas of azure waters and glaciers. (B,L,D)

CRUISING: PUERTO CHACABUCO. Arrive in northern Patagonia’s Puerto Chacabuco where sculptured icebergs, soaring fjords, and Andean peaks surround you. This tiny town is truly an untouched settlement amidst the pristine and rugged landscape of the Andes Mountains and massive glaciers. Perhaps opt to visit Rio Simpson National Reserve for light hiking and the opportunity for wildlife viewing. (B,L,D)

CRUISING: PUERTO MONTT. Wake up in Patagonia’s Lake District and the town of Puerto Montt with its Bavarian feel. Options today include a visit to Lago Todos los Santos to see waterfalls, breathtaking scenery, and Osorno Volcano. (B,L,D)

VALPARAISO (DISEMBARKATION) - SANTIAGO. Disembark your ship this morning in Valparaiso and transfer to Santiago, Chile’s scenic capital between the Pacific and the Andes. With a coastline more than 2,650 miles long, Chile is more than 10 times longer than wide. Its distinctly European flavor, accented with Latin flair, makes Santiago one of South America’s most sophisticated and modern cities.

SANTIAGO. Your guided CITY TOUR introduces you to Santiago—the country’s political, commercial, and cultural capital. View La Moneda Government Palace and San Cristobal Hill with its landmark statue of the Virgin Mary. Also, see Club Hipico, one of the most renowned horseracing tracks in South America. Your tour ends at the city’s main square, Plaza de Armas, with a visit to the relic-rich CATHEDRAL. Your afternoon is at leisure. This evening, consider the optional Chilean Folkloric Dinner Show.

SANTIAGO. Your vacation ends after breakfast this morning

"Born and raised in Rio de Janeiro, I speak English, French, Spanish, and Portuguese. I became a Tour Director in 1986, and I love my work. It's so great to see guests engage with the diversity of South American countries -their traditions and contrasts. I love sharing the history of these countries, watching the group interact during the trip, and knowing I play a fundamental role in the success of the trip." 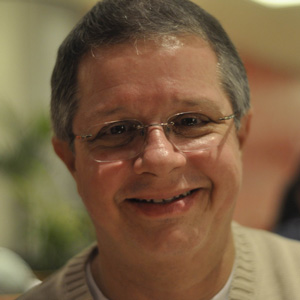