Breathtaking, lush landscapes combined with vibrant cities and historic attractions—all of this and more await you on this guided Ireland tour, including Northern Ireland. Starting and ending in Dublin, explore Ireland in depth and hear exciting stories of its rich history, legends, and myths. On an Ireland tour, you expect to see amazing scenery, and this tour does not disappoint. See the 668-foot Cliffs of Moher on Ireland’s west coast, offering breathtaking views of rugged cliffs dropping into the ocean. Join the Ring of Kerry, a 100-mile drive with sparkling seascapes and mountains dotted with brightly colored farmhouses. In Northern Ireland, visit awe-inspiring Giant’s Causeway, basalt columns formed millions of years ago by volcanic eruptions. On the amazingly green Dingle Peninsula—perched on Ireland’s westernmost tip and dominated by the range of mountains—enjoy one of Europe’s most dramatic drives passing seaside villages, ancient monuments, and views of the Blasket Islands. On this tour of Ireland, you’ll also visit some of its vibrant cities—including Dublin, Belfast, and Galway—and charming towns, including Killarney. Stop in Adare, founded in medieval times and known today as one of Ireland’s friendliest and prettiest villages and in Waterford, enjoy a guided tour of the House of Waterford Crystal, where you’ll see the highly skilled artisans at work in the production of this famous crystal. You’ll also see artisans at work on your visit to Ireland’s oldest handweaving mill at Avoca. In Northern Ireland, visit Derry, one of Ireland’s best-preserved fortified cities, and Downpatrick, burial place of Ireland’s Patron Saint. This value-minded tour through Ireland is a dream vacation! 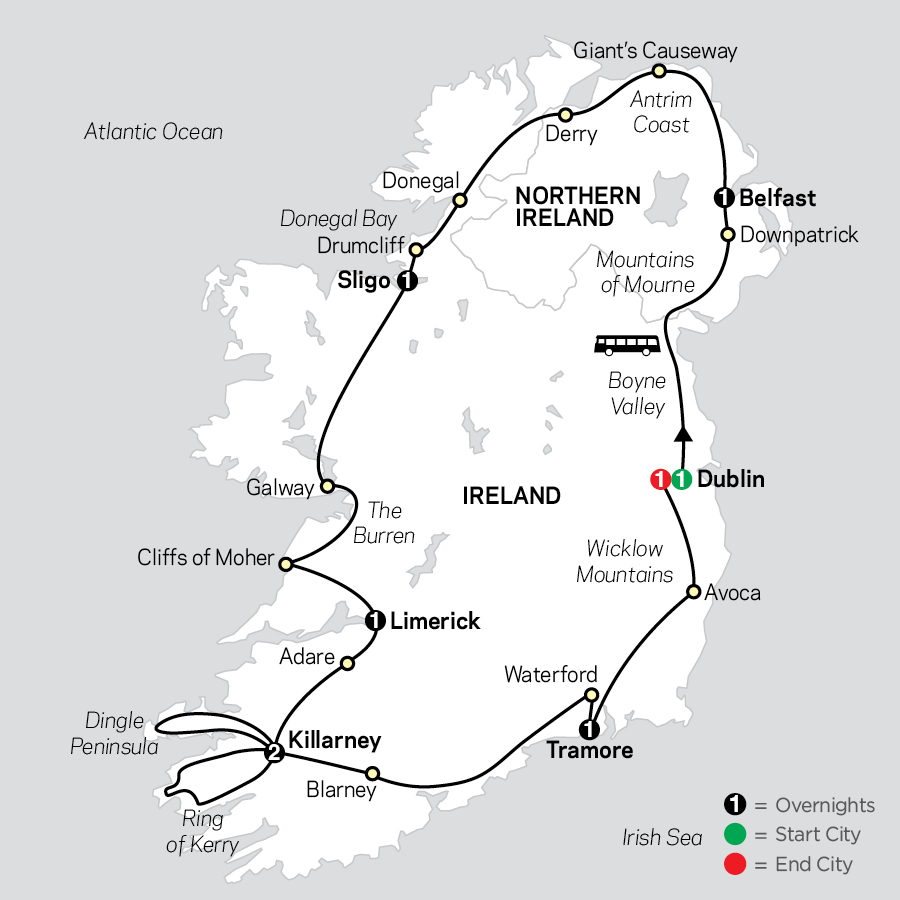 ARRIVE IN DUBLIN, IRELAND Check into your hotel. At 3 pm, meet your Tour Director and traveling companions for an afternoon orientation drive through statue-lined O’Connell Street and elegant Georgian squares to St. Patrick’s Cathedral and Trinity College. End the day with an optional dinner evening at the Guinness Storehouse.

DUBLIN–DOWNPATRICK, NORTHERN IRELAND–BELFAST On your northbound route today, pass Drogheda, scene of the Battle of the Boyne in 1690, then through the fertile landscape of the Boyne Valley, known for its prehistoric passage graves. Cross the border into Northern Ireland, and drive past the Mountains of Mourne to Downpatrick, the burial place of Patrick, Ireland’s Patron Saint, and on to the vibrant city of Belfast, where the Titanic was built. Later, why not join a Local Guide on a “living history” tour, including a visit to the fascinating Titanic Experience?Today’s Distance: 125 mi/ 202 km

BELFAST–GIANT’S CAUSEWAY–DERRY–DONEGAL, IRELAND–DRUMCLIFF–SLIGO First stop this morning is awe-inspiring Giant’s Causeway, a UNESCO World Heritage Site. Then, let the province’s story unfold as you head for the city of Derry before returning to the Republic to visit Donegal, the ancient town founded by Danish Vikings and home of the O’Donnell Clan. Drive along Donegal Bay with its small fishing ports and hidden beaches, and stop in Drumcliff to see the grave of W.B. Yeats before arriving in Sligo.Today’s Distance: 197 mi/ 316 km

SLIGO–GALWAY–CLIFFS OF MOHER–LIMERICK Travel farther south to Galway, a popular seaside destination and a buzzing cosmopolitan center with colorful shops, and a busy café and bar culture. Cross the limestone plateau of The Burren to visit the spectacular 668-foot Cliffs of Moher. Tonight, you might like to join an optional medieval banquet.Today’s Distance: 181 mi/ 290 km

LIMERICK–ADARE–DINGLE PENINSULA–KILLARNEY Start your day with a stroll through Adare, a village known for its prize-winning thatched cottages. Then, take in the breathtaking scenery of the Dingle Peninsula, where the 32-mile Slea Head drive affords magnificent vistas of the Atlantic Ocean. See the Blasket Islands, and hear about the way of life and unique literary achievements of its inhabitants prior to their evacuation in 1953. The next two nights are spent in the popular resort of Killarney. Tonight, enjoy the optional outing to Tralee for dinner and a performance at Siamsa Tire, Ireland’s National Folk Theatre.Today’s Distance: 156 mi/ 253 km

KILLARNEY. RING OF KERRY EXCURSION At Killorglin, join the Ring of Kerry for a 100-mile coastal panoramic drive featuring sparkling seascapes, mountains dotted with brightly colored farmhouses, winding lanes bordered with subtropical vegetation, and spectacular views of the Lakes of Killarney from Ladies View. Back in Killarney, a special optional adventure: take a horse-drawn jaunting car along the national park lakeshore for pictures of Ross Castle.Today’s Distance: 90 mi/ 146 km

KILLARNEY–BLARNEY–WATERFORD–TRAMORE More scenic splendor as you head over the Kerry Mountains into County Cork. Stop in Blarney, famous for its Stone of Eloquence, with time at your leisure to see the castle and shop for Irish crafts and handmade crystal. After lunch, drive past Cork, the country’s second-largest city on the way to Waterford, where a guided tour of the House of Waterford Crystal is included. Spend the night at the nearby seaside resort of Tramore. Later, consider an optional pub tour.Today’s Distance: 132 mi/ 212 km

TRAMORE–AVOCA–DUBLIN On the last leg of your journey, visit Ireland’s oldest handweaving mill at Avoca, and enjoy views of the Wicklow Mountains on your way to Dublin. An optional Irish cabaret evening, including dinner, dance, song, and laughter would be an exciting finale to your vacation.Today’s Distance: 130 mi/ 209 km

DUBLIN Your vacation ends with breakfast this morning.

"Being a Tour Director has increased my passion and enthusiasm for the beautiful verdant islands of Britain and Ireland with their rich and varied history, culture and heritage. Sharing this with the many visitors is a pleasure and a privilege. Come and enjoy the experience of a lifetime."

"I have been guiding with Globus since 2014 and I absolutely love it. I have always loved travelling because I think we get to see the best of people while they are relaxed and sharing new experiences every day. Showing people my home country of Ireland with all of its folklore, history, culture and quirks is always magical." 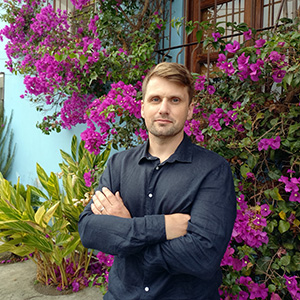