9 Day Tour from Madrid to Madrid

9 Day Tour from Madrid to Madrid

This affordable tour of Spain and Portugal will introduce you to an exciting adventure through fascinating cities and cultural discoveries. Spend three nights in Madrid, two nights in both Seville and Lisbon, and one night in Coimbra. Enjoy sightseeing with a Local Guide—an expert in the city’s history and sights—in Lisbon, Seville, and Madrid. The included city tours focus on the must-see sights, including Seville's impressive Plaza d’Espaňa, built for the Ibero-American Exposition in 1929, and Lisbon's Belem Tower, a UNESCO World Heritage Site built around 1514 to commemorate the expedition of Vasco de Gama. In Madrid, you will admire the impressive architecture of the elegant wide alleys crossing the city center. Highlights on this affordable tour of Spain and Portugal include the Marian Sanctuary at Fátima, a popular Catholic pilgrimage site, and Obidos, a fortified city still flanked by towers and bastions overlooking the countryside dotted with windmills. Explore the university city of Salamanca, where you can stroll the Plaza Mayor, considered the most beautiful square in Spain. From the larger cities to the idyllic countryside and landscapes, this value-minded tour through Spain and Portugal is sure to delight. 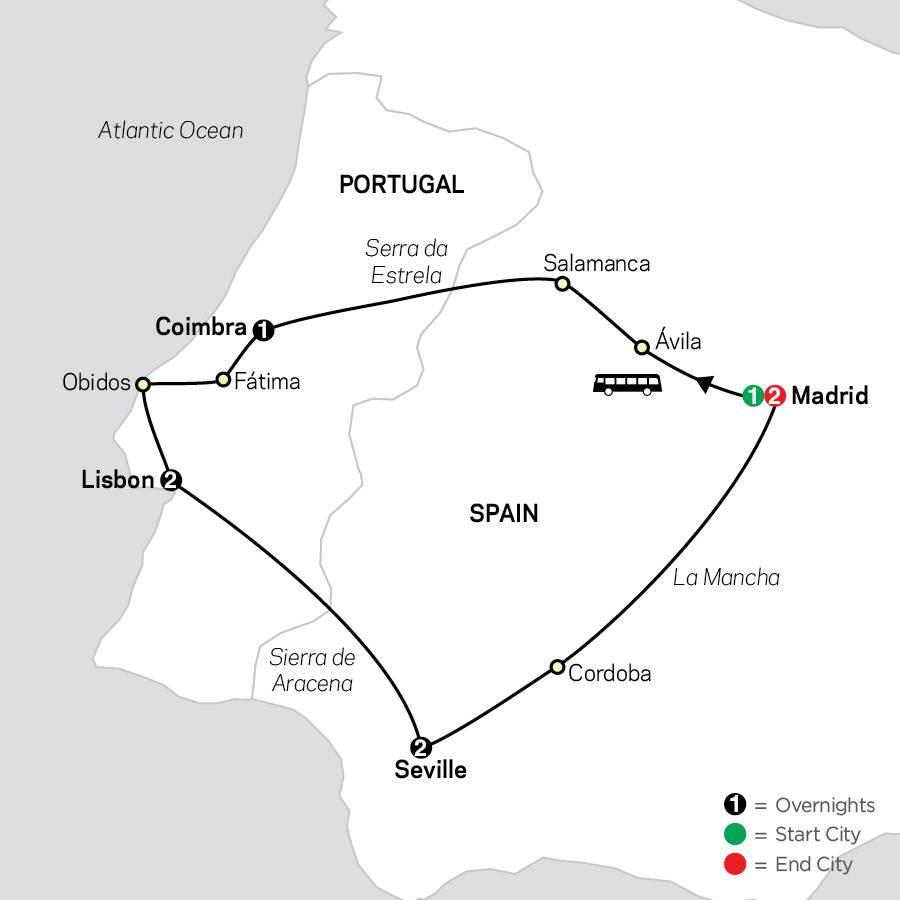 ARRIVE IN MADRID, SPAIN Check into your hotel. The rest of the day is free to start exploring lively Madrid. Tonight, meet your Tour Director and fellow travelers.

MADRID–ÁVILA–SALAMANCA–COIMBRA, PORTUGAL Visit fortified Ávila with its intact medieval city walls, then stop in Salamanca. Be sure to spend some time wandering around Salamanca’s Plaza Mayor, considered the most beautiful square in Spain. Journey into the valley of the Serra da Estrela on your way to Coimbra in Portugal. Today’s Distance: 336 mi/ 540 km

COIMBRA–FÁTIMA–OBIDOS–LISBON Enjoy an orientation tour of Coimbra, strategically situated on a hill overlooking the Mondego River. Continue to Fátima to visit the Sanctuary, a catholic pilgrimage site where the Virgin Mary appeared to three shepherd children—Francisco, Jacinth, and Lucia—on May 13, 1917. On to Obidos, a fortified city still flanked by towers and bastions overlooking the countryside dotted with windmills. Overnight in Lisbon. Today’s Distance: 162 mi/ 260 km

LISBON Henry the Navigator made Lisbon the 15th-century “Mistress of the Seas.” You’ll see his monument, the Belem Tower, the Moorish Citadel, the impressive Black Horse Square, and other highlights on your guided city tour. Spend the afternoon at leisure in the Alfama’s tile-decorated streets, or discover the Portuguese Riviera by joining our optional excursion.

LISBON–SEVILLE, SPAIN Drive into the Alentejo through the countryside, famous for its cork production. Cross the border at Vila Verde into Spain and journey into Andalusia, enjoying quite different scenery as you skirt the Sierra de Aracena on your way to delightful Seville. Today’s Distance: 273 mi/ 440 km

SEVILLE Seville is the city of passionate flamenco and one of Spain’s most colorful and vibrant cities. Enjoy an included sightseeing tour with all the main highlights, including the iconic Plaza de España, located in the centre of the Parque de María Luisa. The park was designed in a "Moorish paradisical style," with a half mile of tiled fountains, pavilions, walls, ponds, benches, and exhedras; lush plantings of palms, orange trees, Mediterranean pines, and stylized flower beds. Numerous buildings were constructed in the park to provide spaces for the Ibero-American exhibition World Fair of 1929.

SEVILLE–CORDOBA–MADRID Travel to Cordoba, Spain’s most Moorish city with its Mezquita, which is rightly known as one of Islam’s greatest pieces of architecture outside the Arab world. Continue through the very heart of La Mancha, famed for its castles and windmills, to Madrid. This evening, why not join the optional traditional tapas dinner and highlights of Madrid? Today’s Distance: 336 mi/ 540 km

MADRID Enjoy free time in Madrid, or join the fascinating optional trip to Toledo. The splendid setting of this old walled city above the Tagus River was made famous in El Greco’s painting—even now, it’s like a great open-air museum of Spanish history and art. Later, join the included Madrid city sightseeing. As the capital of Spain and situated 2,180 feet above sea level, the Spaniards call Madrid the nearest thing to Heaven.

MADRID Your vacation ends with breakfast this morning.

"Working as a Tour Guide is one of the most rewarding jobs in the world, because it consists in SHARING. Sharing experiences and knowledge with people from different parts of the world, showing them the legacy left by the different civilizations in Iberia, recommending the best sunsets or the most popular tapa of that city. For me, it is a pleasure to welcome you to my country. I am ready to share with you my knowledge. Are you?" 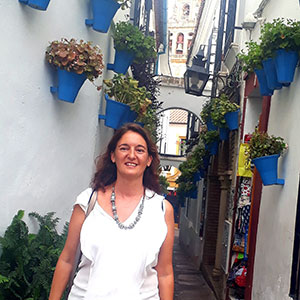