Mysteries of the Inca Empire with Galapagos Cruise (1305)

17 days from Lima to Quito

Mysteries of the Inca Empire with Galapagos Cruise

17 days from Lima to Quito

On this Peru tour—with a Galápagos Islands cruise—delve into the past, learn about the local culture, and experience beautiful scenery as you overnight in Lima, the Sacred Valley, Machu Picchu, Cusco, Lake Titicaca, and Quito, along with three nights aboard the Galápagos Legend. You'll visit ancient ruins, enjoy guided sightseeing, and marvel at the flora and fauna found in the Galápagos Islands. History comes alive on this tour through Peru. Imagine what life was like in the 15th century as you tour the ancient ruins of Machu Picchu, where you'll see this famous Inca complex set in a majestic setting. More history awaits at Ollantaytambo, the archaeological site of the Incas’ resistance during the Spanish conquest, and the Temple of Sacsayhuaman, a fortress with some of the best examples of Inca masonry. Guided sightseeing in Cusco features the Santo Domingo Monastery and the Cathedral, housing a magnificent collection of artwork. On this Peru tour, you'll also learn about the local culture. On your motorboat tour of Lake Titicaca, you'll visit Taquile Island, where you'll see how the local people integrate their Inca and Spanish past, and the Uros Floating Islands, where you'll learn how the Uros Indians construct their islands from totora reed. In the Incan town of Ollantaytambo and in Sillustani, visits with locals in their homes give you insight into their way of life. Spend time at the Indian market in Pisac and in Awanakancha, learn about the importance of camelids (llama, vicuña, alpaca, and guanaco) to Inca culture. You'll also spend six nights in Ecuador, including three nights in Quito and three nights cruising the Galápagos Islands. Swim and snorkel in search of sea life, explore the islands, marvel at the many bird species, and enjoy seeing giant tortoises, sea lions, land iguanas, blue and red-footed boobies, and much more. These are just some of the many highlights of this Peru tour and Galápagos Islands cruise. Designed for savvy, value-minded travelers, it's a dream vacation! 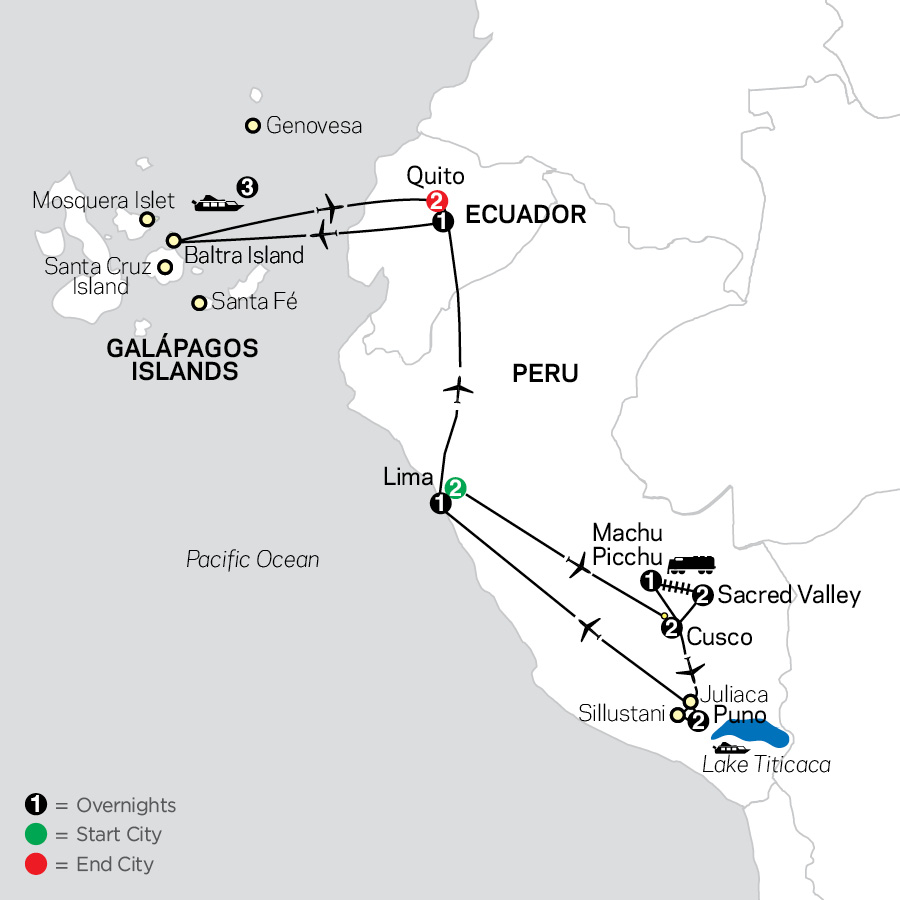 
Visit a home in the Sacred Valley and help support local families of the region through Cosmos’ contributions.

LIMA, PERU Welcome to Lima, Peru. Heralded as the “City of Kings” by Spanish conquistadors, Lima retains vestiges of its opulent past with its colonial buildings and world-class museums.

LIMA Sightseeing today focuses on Lima’s colonial heritage. Founded in 1535, Lima was once capital of Spain’s South American Empire. Visit the baroque 11th-century San Francisco Monastery, with Spanish and Moorish architecture throughout. Continue to Plaza Mayor, where you will see the Government Palace that houses the presidential palace and was once the home of Francisco Pizarro, founder of Lima and conqueror of Peru. Nearby, see the cathedral where Pizarro’s remains are buried. The remainder of your day is free to explore. Enjoy dinner at a local restaurant this evening.

LIMA–CUSCO–SACRED VALLEY Fly to Cusco high in the Andes and upon arrival, descend into the Sacred Valley of the Incas. Stop at Awanakancha and learn about the importance of camelids (llama, vicuña, alpaca, and guanaco) for Inca cultures. See them up close and learn how their coats are transformed into precious fibers for ancient weaving techniques still in use today. Continue to Pisac, a charming village with a famous Indian market, where you have plenty of time to browse the many colorful stalls selling handicrafts ranging from alpaca sweaters and blankets to painted vases and sterling silver. Later, arrive at your hotel in the peaceful Sacred Valley.

SACRED VALLEYStart the day with a visit to the village of Ollantaytambo and the Inca ruins of the same name. Explore the archaeological site that was the scene of the Inca resistance during the Spanish conquest—the only place ever to resist Spanish attacks. See how the temple area at the top of the terraces was the perfect defensive stronghold, then visit a local home in this Incan town to experience life in a traditional village, which has been remarkably well preserved. Next, visit the Seminario ceramics workshop to learn about Peruvian ancient and modern art. End your day at a local chicheria for a taste of a chicha, a typical Inca drink in Peru.

SACRED VALLEY–MACHU PICCHU Board the Vistadome train that cuts a path through the picturesque Urubamba Valley bound for Aguas Calientes, the quaint town closest to the “Lost City of the Incas.” Ascend the mountainside through tropical forest to the sacred refuge of Machu Picchu. Listen as your guide recounts the many accomplishments of the Incas as you tour the terraced ruins dating back to the 15th century. Abandonded when the Inca Empire fell to the Spanish, these remarkable ruins remained undiscovered for nearly 400 years. Many mysteries surrounding Machu Picchu remain to this day.

MACHU PICCHU–CUSCOEnjoy some free time this morning to explore the mountain town of Aguas Calientes; perhaps visit the local market, quaint boutiques, or take a walk along nearby trails. Later this afternoon, return to Cusco, former capital of the Inca Empire.

CUSCOEmbark on a guided sightseeing tour of Cusco that focuses on the city that was once the political, military, and cultural epicenter of the Incas until the Spanish toppled it. In fact, Inca foundations can still be found in Cusco, with the Spanish baroque structures built on top. Visit the Santo Domingo Monastery, where these two forms of architecture are melded together with the temple of both cultures atop one another. Also, see the Cathedral in the Plaza de Armas, housing a magnificent collection of artwork, including a depiction of The Last Supper that portrays the apostles dining on cuy (guinea pig). Continue to the hillside overlooking Cusco for a visit to the Temple of Sacsayhuaman. Some of the best examples of Inca masonry can be found at this fortress, where stones weighing up to 350 tons are pieced together to form a complex that could house up to 10,000 men. Learn about the ceremonies and battles that took place here, then see the ruins of Kenko and Puca Pucara before returning to Cusco.

CUSCO–JULIACA–PUNOFly to Juliaca, then transfer to Puno on the shores of Lake Titicaca. Legend says the first Inca, Manco Capac, arose from the waters of the lake by the power of the sun god to found the Inca Empire.

PUNO. EXCURSION TO LAKE TITICACAExperience fascinating Lake Titicaca today as you embark on a motorboat tour of the highest navigable lake in the world and its man-made islands. On Taquile Island, see how the local people integrate their Inca and Spanish past. This is evident by the Spanish peasant dresses made of Andean textiles—the islanders make some of the finest in all of Peru. Continue to the Uros floating islands, a group of approximately 40 artificially made islands. Learn how the Uros Indians construct their islands, homes, boats, and many other resources completely of tortora reed, a centuries-old practice. Enjoy a farewell dinner hosted by your Tour Director this evening.

PUNO–JULIACA–LIMAReturn to Juliaca, stopping at the pre-Incan burial grounds of Sillustani en route. See the above-ground tombs, chullpas, in which the Aymara Indians buried their high priests. You will be welcomed into a local home for an inside look at life here. Later, a short flight returns you to Lima, where you will transfer to your hotel.

QUITO–BALTRA (EMBARKATION)–GALÁPAGOS CRUISINGFly to Baltra and visit the highlands of Santa Cruz, marked by extinct volcanoes, lava tubes, and astonishing plantlife. Here, witness giant tortoises in a natural reserve and learn about efforts to conserve these ancient creatures. Continue to the port where you will board the Galápagos Legend.

GALÁPAGOS CRUISING: GENOVESA ISLANDWake up at Genovesa Island and encounter a small fur seal grotto before taking a walk up Prince Philip’s Steps to see large nesting colonies of Nazca and red-footed boobies. Wedge-rumped Storm Petrels can be observed flying in all directions and, if you are lucky, you may catch a glimpse of a short-eared Owl. After lunch on board, visit Darwin Bay to observe frigate birds, red-footed boobies, herons, lava gulls, and many other bird species.

GALÁPAGOS CRUISING: SANTA CRUZ & SANTA FÉ ISLANDSBack on Santa Cruz, walk by a brackish lagoon where feeding flamingos are often found. Climb Dragon Hill, an important nesting ground for endemic land iguanas. On Santa Fé, a large sea lion colony greets you on its white-sand beach. Walk through a cactus forest in search of the endemic Santa Fe land iguana, the largest in the islands and distinctively paler than its counterparts. This island is home to a number of endemic species, including the Galápagos hawk, Galápagos snake, a variety of finches, and one of the four species of Galápagos mockingbirds.

GALÁPAGOS CRUISING: MOSQUERA ISLET–BALTRA (DISEMBARKATION)–QUITOYour final visit takes you to Mosquera Islet. This flat, sandy island has a large colony of sea lions and is an excellent site for observing shorebirds such as herons and Lava Gulls. Take a dip in the waters and snorkel to see the abundant sea life. Later, disembark and fly to Quito.

"Born in Venezuela and raised in Ecuador, I'm an architect by profession, but a Tour Director by heart. I have worked as a South America lecturer for cruise lines, a guide in Ecuador and the Galápagos, and a Tour Director in South America. My goals are to transform each guest into a Peruvian expert and to encourage them to try and appreciate authentic Incan food. So, let's discover together the mysterious land of the Incas and maybe even sample roasted guinea pig!" 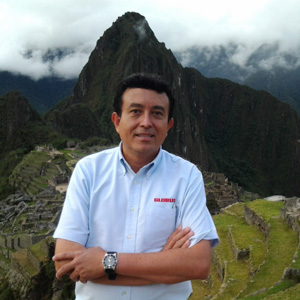