Welcome to Ontario and Québec—where exciting cities and breathtaking scenery await you on this eastern Canada tour. You'll spend two nights in Toronto, Ottawa, and the Québec City area, and one night in Montréal. On your sightseeing tour in each city, you'll see the must-see sights, such as the 1,815-foot-tall CN Tower in Toronto, Canada’s largest city; the Canadian Mint in Ottawa, Canada’s capital; Québec City's Place Royale, the historic square known as the birthplace of French America; and Montréal's Mount Royal, designed by the same designer as New York City’s Central Park. In Ottawa, you’ll visit the Royal Canadian Mounted Police stables, a tribute to Canadian heritage and history. In Québec, visit the Basilica of Notre Dame, dating to the 19th century, and Cap de La Madeleine, a national shrine with its fine stained-glass windows. Also enjoy time to explore Québec City, Canada’s only walled city and a UNESCO World Heritage Site. But that’s not all…you’ll enjoy stunning scenery on this eastern Canada tour. For a tour highlight, board a sightseeing boat for a thrilling ride to view breathtaking Niagara Falls. You’ve seen photos of Niagara Falls, and now’s your chance to see it up close. These falls are nothing short of spectacular! Also enjoy a cruise that takes a scenic route through the many islands of St. Lawrence Islands National Park. From the vibrant cities to the beautiful scenery, this eastern Canada tour designed for the value-minded traveler is a wonderful vacation!

*Book a select 2022 Cosmos Canadian vacation to receive a $100 per person discount on the land price. Booking must be made, under deposit and discount applied between April 11 and May 31, 2022 for travel in 2022. Discount will apply to individual members of groups adding a name and non-refundable per person deposit within the promo window. Not applicable on TBA space. Not applicable to custom tours or sole use. Combinable with all other applicable promotions. Applies to new 2022 bookings only and offer will not be applied to pre-existing bookings. Offer reliant on space availability. Full cancellation penalties will apply. Additional restrictions may apply; see Travel Terms & Conditions for details. Offer may be withdrawn at any time. Offer available from participating GFOB offices only. PRMN049 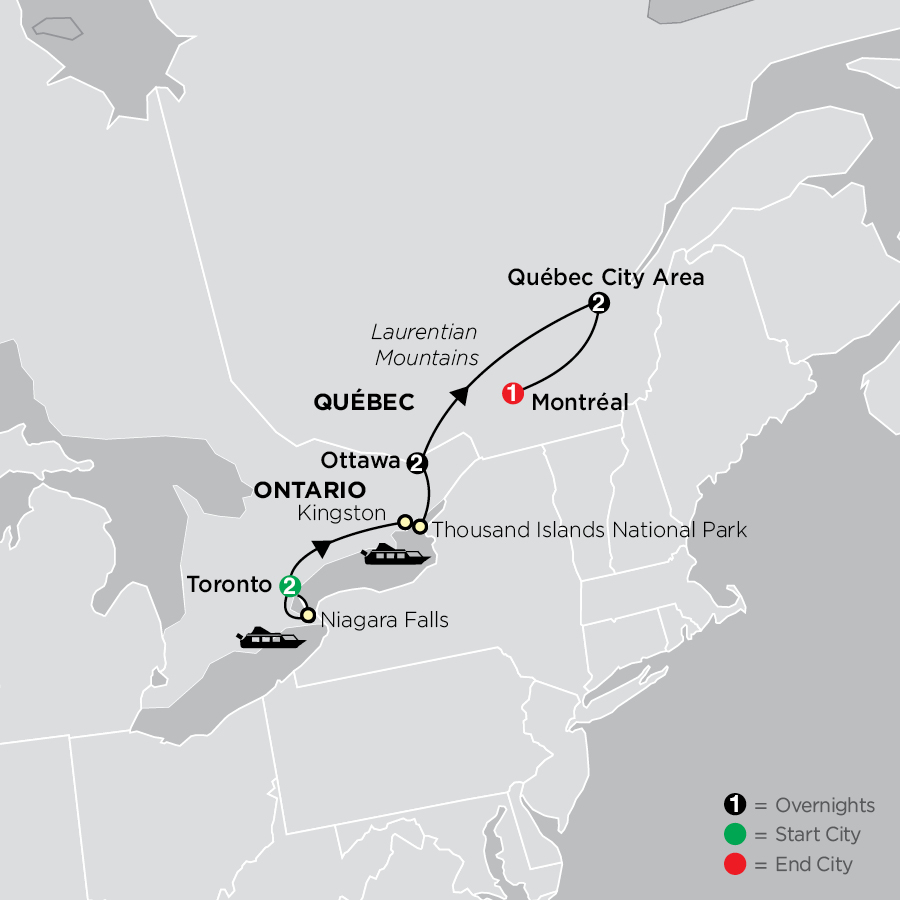 
Local Guides for city sightseeing in Québec City and Montréal; services of a professional Tour Director.

MONTRÉAL Your vacation ends this morning.