8 Day Tour from Paris to Paris

Paris, Normandy and the Loire

8 Day Tour from Paris to Paris

This northern France tour is the perfect way for value-minded travelers to see the highlights of Paris plus the Loire Valley and Normandy. Beautiful scenery combined with famous landmarks and fascinating history sum up this tour. You’ll visit some of northern France’s interesting and charming towns, including Rouen, best known for its connection to Joan of Arc. Here, step into the splendid Gothic cathedral, which was once the world’s tallest building and the subject of a series of Claude Monet’s paintings, just like the water garden in Giverny, depicted in some of his most famous canvases. Visit Honfleur, a romantic port city; Rennes, with its traditional, colorful timber-framed houses; Blois, a picturesque town in the Loire Valley, with its renaissance castle located in the town center; and Chartres, famous for pilgrimages to its 13th-century gothic cathedral. In Bayeux, follow the story of the Norman conquest of England in 1066 depicted on the Bayeux Tapestry, listed by UNESCO. Admire the cathedral, ramparts, and ancient walls of St. Malo, a fortified seaside resort. Memories of World War II history come to life as you visit the American Cemetery at Omaha Beach and the landing beaches. Other highlights of this affordable France tour include picturesque Mont St. Michel, situated on a rocky isle with its world-famous abbey. Spend a day at leisure in Châteaux Country with the opportunity to take an optional excursion to discover the Château of Chenonceau, a 16th-century, fairytale castle with a moat, drawbridge, and towers. From historic sights to picturesque sceneries, this is a dream vacation! 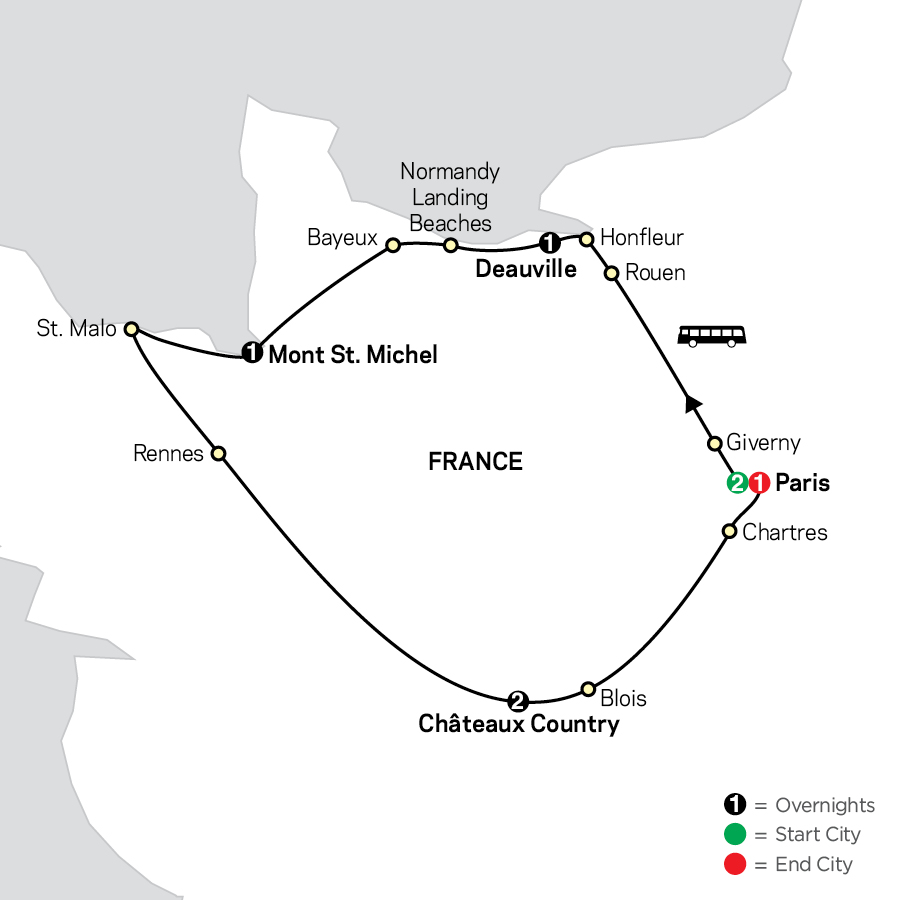 
Departure November 11: due to closure of Giverny Gardens - visit to D-Day Museum instead.

ARRIVE IN PARIS, FRANCE Check into your hotel and use your CosmosGO app to explore the French capital. Tonight, meet your Tour Director and fellow travelers.

PARIS Enjoy a full day to explore the “City of Light,” known in the world for its fashion, art, museums, cuisine, and joie de vivre. Enjoy included sightseeing with a local expert to see many of the best-known Parisian sights, including views of the Eiffel Tower and Arc de Triomphe. Optional excursions are also available.

PARIS–GIVERNY–ROUEN–HONFLEUR–DEAUVILLE Start the day with a visit to Giverny*, home of impressionist painter Claude Monet. The famous water garden at Giverny was the inspiration behind some of Monet’s finest work (gardens open from April to October). Continue to Rouen to visit its great cathedral. Next, enjoy a stop in lovely Honfleur, situated on the Seine estuary, and then continue to the seaside resort of Deauville. Today’s Distance: 162 mi/ 2600 km

DEAUVILLE–NORMANDY LANDING BEACHES–BAYEUX–MONT ST. MICHEL Visit the legendary beaches of Normandy, where Allied troops landed more than 75 years ago. The highlights are Arromanches and the American Cemetery at Omaha. On to Bayeux, famed for its lacemaking and the world-renowned Bayeux tapestry depicting the story of William the Conqueror and Harold, Earl of Wessex—who led the Norman and Saxon armies in 1066 to conquer England. Then, discover spectacular Mont St. Michel, which stands on an island accessible by a causeway. Today’s Distance: 143 mi/ 230 km

CHÂTEAUX COUNTRY Spend a whole day at leisure or to take advantage of a fascinating optional excursion to Château of Chenonceau, now privately owned, and the most visited castle of the Loire Valley. Visit Amboise, where Leonardo da Vinci spent the last three years of his life.

CHÂTEAUX COUNTRY–BLOIS–CHARTRES–PARIS Take a stroll around Blois, with its Renaissance castle, once occupied by Louis XII. Later, stop in Chartres, home of the famous Gothic cathedral, and arrive in Paris in time to enjoy an optional evening excursion. Today’s Distance: 162 mi/ 260 km

PARIS Your vacation ends with breakfast this morning.

"It would delight me to show you France - the most visited country in the world. This is a place of enormous variety in its history, natural beauty, and the magic of Paris! Add to this the fantastic food, wonderful wines, and musical language and you'll truly fall in love with the country and its people!" 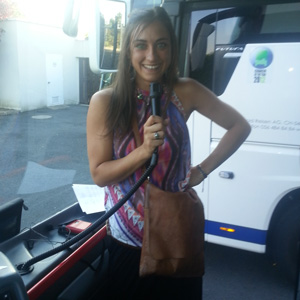 "Always thirsty for new challenges, my path led me to the role of Tour Director. I love people, enjoy sharing the history and anecdotes of the different places visited on tour. Everyday is different, and this provides me with the motivation to hopefully meet everyone's dream. I do believe that travelling is like a book, if you do not travel you will always remain on the first page. All we need is to open our eyes to the world, and enjoy every moment we have, as life is a journey." 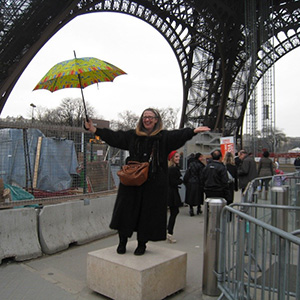