16 Day Tour from Madrid to Madrid

16 Day Tour from Madrid to Madrid

On our Spain, Portugal, and Morocco tour, experience the rich history and distinct cultures of these three glorious countries. You'll overnight in Madrid, Seville, Granada, and the Costa del Sol in Spain; Coimbra and Lisbon in Portugal; and Rabat, Marrakesh, and Fez in Morocco. The tour will start in Madrid, where you’ll discover the main sights with a local guide. On the way to Portugal, visit Avila, a UNESCO World Heritage Site, with its ancient fortified towers and walls, and beautiful Salamanca. The Portuguese pearls you’ll discover on this affordable tour are Coimbra, Obidos, Fatima with its famous Sanctuary, and the capital, Lisbon. Cross the Strait of Gibraltar to Morocco on the African continent by ferry to step back in time in Rabat, a UNESCO World Heritage Site and Morocco's capital. Fez is still the cultural and spiritual center, and its centerpiece is the Medina, a UNESCO World Heritage Site. Its palaces, madrasas, fondouks, residences, mosques, and fountains date back to the 13th-14th centuries. The red city of Marrakesh remains a tapestry of ramparts, mosques, palaces, gardens, vibrant public squares, and souks (markets). You’ll get to know this fascinating city with a local expert on the included sightseeing tour. Stop in Casablanca, Morocco's westernmost city and still known for the 1942 classic film with Humphrey Bogart and Ingrid Bergman. Once back on the European continent, you will love the included guided visit to Granada's legendary Alhambra complex*, a lavish palace and fortress built by Moorish kings in 889 AD, and you will appreciate it even more after having visited Morocco. These are just some of the many highlights on this comprehensive and affordable Spain, Portugal, and Morocco tour. It's a memorable budget vacation for value-mind travelers. 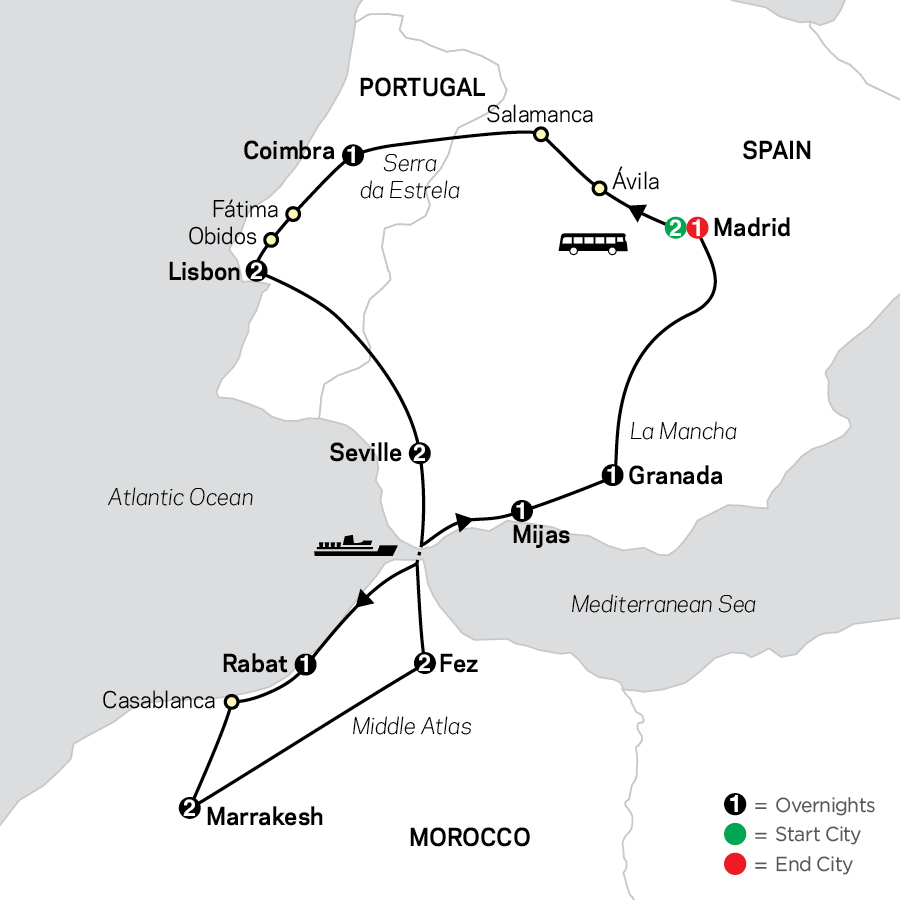 
Touring by private, first-class, air-conditioned motorcoach with free Wi-Fi; ferry across the Straits of Gibraltar

ARRIVE IN MADRID, SPAIN Check into your hotel. Take advantage of any free time to explore lively Madrid with the help of the CosmosGO app. Tonight, meet your Tour Director and fellow travelers.

MADRID Spaniards say the Spanish capital, situated 2,180 feet above sea level, is the nearest thing to Heaven. It’s certainly worth making the most of today by joining the included guided sightseeing tour: a full panoramic drive by way of the Calle Alcalà, Parliament Square, and a picture stop outside the Royal Palace. The optional trip to Toledo is most rewarding, too. The splendid setting of this old walled city above the Tagus was made famous in El Greco’s painting, and even now it’s like a great open-air museum of Spanish history and art.

MADRID–ÁVILA–SALAMANCA–COIMBRA, PORTUGAL Visit ancient fortified Ávila with its many towers, a UNESCO World Heritage Site. Continue to Salamanca and make sure you spend some time wandering around Plaza Mayor, the grandest square in Spain. Cross the border to Guarda, one of the most important strongholds in a set of fortifications which defended the Portuguese against Castile and León during the Middle Ages. From here, descend to the valleys of the Serra da Estrela to Coimbra.Today’s Distance: 336 mi/ 540 km

COIMBRA–FÁTIMA–OBIDOS–LISBON Enjoy an orientation tour of Coimbra, celebrated for its beauty and ancient university. Later, travel southward to visit the Sanctuary of Fátima, one of Europe’s most visited Marian shrines. Continue to picturesque fortified Obidos, before reaching Lisbon for two overnights.Today’s Distance: 162 mi/ 260 km

LISBON On the included guided city tour, see the monument dedicated to Henry the Navigator, the Belem Tower, the Moorish Citadel, and the impressive Commerce Square, also known as Black Horse Square, facing the Tagus river. Spend the afternoon at leisure—maybe in the Alfama’s tile-decorated streets, or take an optional excursion to the Portuguese Riviera.

LISBON–SEVILLE, SPAIN From the rolling plains of the Alentejo with its woodlands of cork and eucalyptus trees, head south to the brilliant light of Andalusia. Admire its neat, white-painted villages and sun-drenched plantations of olives, figs, and almonds while traveling towards magnificent Seville.Today’s Distance: 261 mi/ 420 km

SEVILLE Enjoy an included sightseeing tour of this vibrant city. Walk in the city center, see some of the main highlights and spend time to admire the impressive Plaza d’España, located in the centre of the Parque de María Luisa. The park was designed in a "Moorish paradisical style", with a half mile of tiled fountains, pavilions, walls, ponds, benches, and exhedras; lush plantings of palms, orange trees, Mediterranean pines, and stylized flower beds. Numerous buildings were constructed in the park to provide spaces for the Ibero-American World Fair of 1929. Afternoon at leisure.

SEVILLE–FERRY TO MOROCCO–RABAT Drive through Spain’s scenic sherry wine region and head south to the coast. Here, you will embark the ferry and cruise across the Strait of Gibraltar to Morocco on the African continent. Travel along what was once the infamous Barbary Coast, then continue the drive south to Rabat, one of Morocco’s imperial cities.Today’s Distance: 273 mi/ 440 km

RABAT–CASABLANCA–MARRAKESH Join the included guided city sightseeing tour of the country’s lively capital, and a visit to Chellah Gardens and Kasbah des Oudaias. Later, reach Morocco’s westernmost city: Casablanca. Enjoy an orientation drive of this modern city and see the illustrious Hassan II Mosque. One of the largest mosques in the world, its minaret soars 689 feet into the sky. Continue on to the “red” oasis city of Marrakesh. An optional excursion this evening is the perfect ending of the day.Today’s Distance: 205 mi/ 330 km

MARRAKESH Today’s included city sightseeing tour with a Local Guide will make you feel like you’ve stepped back in time. Founded in the 9th century, Marrakesh remains a tapestry of ramparts, mosques, palaces, gardens, and vibrant public squares and souks (markets)—where buying and selling and a fascinating carnival of entertainment occurs daily. Also visit the Bahia Palace and Majorelle Gardens.

MARRAKESH–FEZ Today, travel through the fragrant cedar forests of the Middle Atlas mountains, where a number of peaks soar above 13,000 feet in elevation. This range is home to the endangered Barbary apes, wild boars, and polecats. On your way north to Fez, enjoy glimpses of North African village life.Today’s Distance: 329 mi/ 530 km

FEZ Ancient Fez is a city of outstanding scenic beauty. Visit the Medina during the included sightseeing tour this morning, and enjoy the maze of narrow streets through the colorful bazaars and exotic atmosphere. The madrasas, fondouks, palaces, residences, mosques, and fountains dating back to the 13th century are part of the UNESCO World Heritage Site. In the afternoon, explore further on your own.

FEZ–FERRY CROSSING TO SPAIN–MIJASToday, an early departure takes you north for the ferry crossing back to mainland Spain to the Costa del Sol. Overnight in Mijas.Today’s Distance: 317 mi/ 510 km

MIJAS–GRANADA Travel along the Costa del Sol to Granada in the heart of Andalusia. Enjoy an included guided visit of the Alhambra Complex*, a lavish palace and fortress built by Moorish kings. Marvel at its architectural beauty and magnificent gardens, with construction dating back to 889 AD.Today’s Distance: 96 mi/ 155 km

DinnerNOTE:*Alhambra complex: Entrance to Nasrid Palace is not guaranteed.

GRANADA–MADRID On your way to Madrid, travel through the very heart of La Mancha region. It was described by Miguel de Cervantes in his 17th-century novel “Don Quixote”. Visitors to the region today still can encounter the 16th-century windmills at which Cervantes’s fictional would-be knight-errant “tilted,” believing them to be gigantic rivals. In addition to its association with Cervantes, La Mancha is well known for its wines.Today’s Distance: 261 mi/ 420 km

MADRID Your vacation ends with breakfast this morning.

"After so many years in this fascinating land, I never get tired of showing people the wonders of Spain, Portugal, and Morocco. Every tour is an adventure...a unique cultural experience I share with my guests. Like a storyteller, I can´t wait to meet my audience and start the show. Introducing travelers to the people, colors, and flavors of the region is exciting-something you just can't get from a guidebook!" 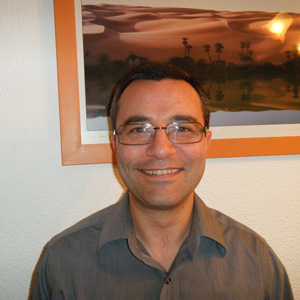