On this Best of Greece tour, discover the best of historic and mythical—as well as modern—Greece. As the birthplace of Western civilization, Greece has some of the world’s most fascinating archaeological sites, and now is your chance to explore the Greek mainland and the Peloponnese peninsula.. Your affordable tour of Greece starts and ends in Athens and overnights along the way in Nauplia, Sparta, Olympia, Delphi, and Kalambaka. Step back in time as you visit some of Greece's ancient sites where the Mycenaean civilization thrived between 1600 and 1200 BC. Enjoy the included guided sightseeing tour of the Mycenae archaeological site and learn about its history and legends. In Athens, visit the Acropolis, still standing after 2,500 years. Your Local Guide will give you many insights on this ancient masterpiece. Dedicated to the goddess Athena, the Acropolis sits high on a rocky hill and is a symbol of the wealth and power of Athens at its apex. In Epidaurus, climb the limestone steps of the amazingly well-preserved, 2,300-year-old open-air theater and marvel at the perfect acoustics. You'll step back in history—but not as far back as Ancient Greece—when you walk around the medieval Byzantine Citadel of Mystra, a castle founded in 1249. You’ll also love the mystic mountain landscape of Meteora with its 24 rock-top monasteries set in almost inaccessible sandstone peaks. On this affordable Greece tour, you’ll travel to Olympia, legendary home of the Olympic Games, and Delphi, where people visited in ancient Greece to seek the advice of the Oracle. But that’s not all…you’ll experience modern Greece as well, as you cross over one of the world's longest cable-stayed bridge, the spectacular Rion-Antirion Bridge, linking the Peloponnese peninsula to the Greek mainland. From ancient ruins to contemporary engineering —with beautiful landscapes in between—this affordable Greece tour is perfectly designed for value-minded travelers. You’ll agree that your Greece vacation is a once-in-a-lifetime experience! 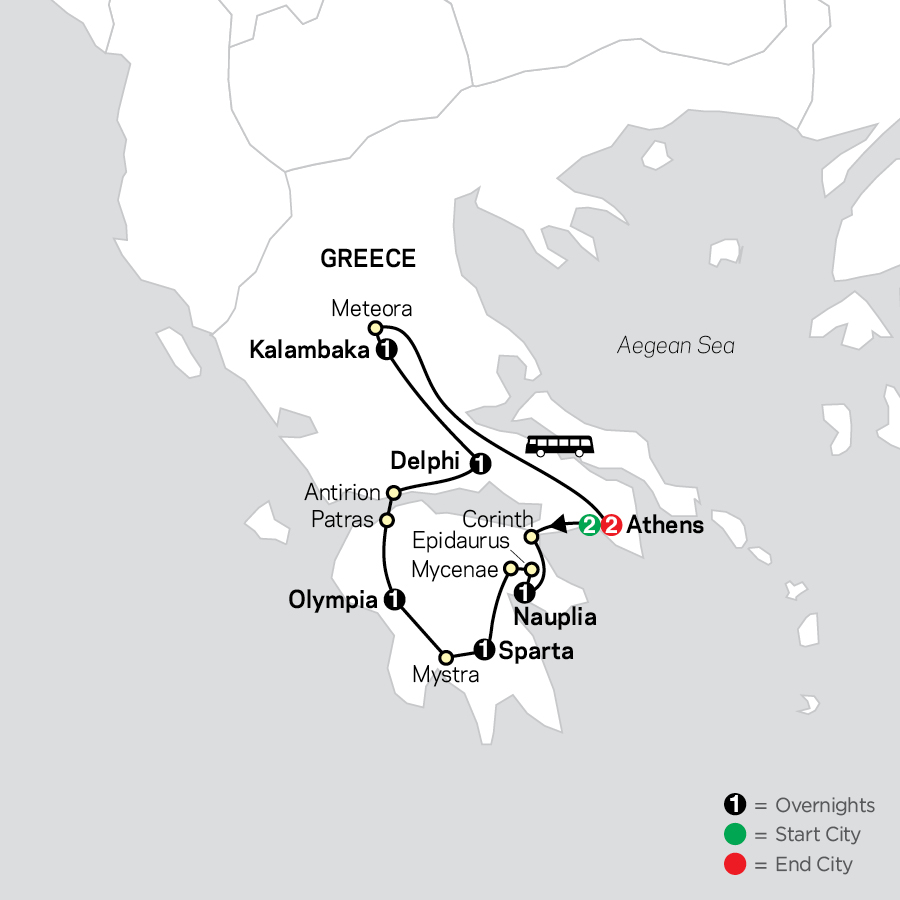 ARRIVE IN ATHENS, GREECE Check into your hotel. The rest of the day is free for you to start exploring the Greek capital with the help of the CosmosGO app. Later, meet your Tour Director.

ATHENS A day to discover Athens at leisure, visiting one of the museums or strolling through the Plaka district, or the opportunity to experience island life on the optional 3-island cruise, visiting Aegina, Poros, and Hydra in one day.

ATHENS–CORINTH–NAUPLIA Join the included guided tour of Athens, featuring the highlights of this ancient capital with a visit to the Acropolis. Cross the Corinth canal, a project conceived in ancient Greece but only completed in 1893, and head for the coast to Nauplia.Today’s Distance: 90 mi/ 145 km

NAUPLIA–EPIDAURUS–MYCENAE–SPARTA This morning, journey into the Argolis to stop in Epidaurus, located in the hilly countryside dotted with pine trees and oleanders. In this magnificent setting, visit the ancient open-air theater that can still seat 14,000 spectators. Later, enjoy the included excursion to the archaeological site and the museum of Mycenae, a city fortress cursed by the gods but rich in gold and warrior kings. Travel into the Peloponnese to Sparta, where history hangs between reality and legend. Today’s Distance: 126 mi/ 202 km

SPARTA–MYSTRA–OLYMPIA Enjoy the included visit of the medieval Byzantine citadel of Mystra, at one time known as the “Florence of the East.” Before arriving in Olympia, visit an olive oil museum. Today’s Distance: 99 mi/ 160 km

OLYMPIA–PATRAS–DELPHI Explore Olympia, where the athletes of antiquity performed in honor of the king of deities. Spend some free time in this pretty town, or learn more about the history of the Olympic Games on the optional archaeological site sightseeing tour. Later, drive north to Patras, the capital of the Peloponnese and the west coast’s largest port. Continue crossing the spectacular Rion-Antirion bridge through the picturesque fishing villages along the south coast of the mainland to legendary Delphi. Today’s Distance: 134 mi/ 215km

DELPHI–KALAMBAKA Enjoy free time in town or join the optional morning sightseeing tour of the archaeological site in Delphi, where the oracle of Apollo spoke. It was the site of the omphalos, the 'navel of the world'. Blending harmoniously with the superb landscape and charged with sacred meaning, Delphi in the 6th century B.C. was indeed the religious center and symbol of unity of the ancient Greek world. On to Kalambaka. Today’s Distance: 143 mi/ 230 km

KALAMBAKA–METEORA–ATHENS A short drive to Meteora, a cluster of spectacular Christian-Orthodox monasteries perched in an unforgettable manner on a set of rising rock formations. They were originally built by hermit monks living in caves carved into the rocks. Later, drive south to Athens. Today’s Distance: 224 mi/ 360 km

ATHENS A full day at leisure to explore the unseen parts of the city, do last-minute shopping, or maybe join the optional Greek dinner. 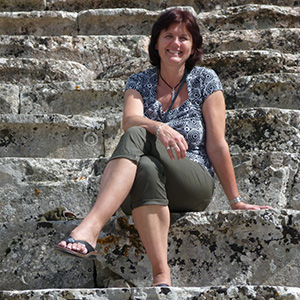