Take a trip across America from sea to shining sea on a 24-day adventure to discover many of the iconic destinations of the United States. This affordable U.S. vacation begins in the Big Apple of New York City. Enjoy guided sightseeing of NYC’s famous attractions—Broadway, the Empire State Building, Rockefeller Center, Chinatown, Wall Street, and more. From New York, travel to the birthplace of Independence—Philadelphia, then to Washington DC, the nation’s capital. See the graves of John F. Kennedy, Jacqueline Bouvier Kennedy, and Robert F. Kennedy at Arlington National Cemetery. Your expert Local Guide will show you the historic sites—the Lincoln Memorial, the Washington Monument, WWII Memorial, and more. Stop for photos at the White House and Capitol Hill. Pass through Pennsylvania Dutch country of lovely Amish farmland, through the home of Little League Baseball in Williamsport, and onto the Rainbow Bridge to Canada for a stay at the mammoth Niagara Falls. Explore the falls via sightseeing cruise and drive along Niagara Parkway, then cross the farmlands and vineyards of Ontario to arrive in Dearborn, Michigan. Visit the Henry Ford Museum in this Detroit suburb to learn about the history of the American automobile. Next, travel to Chicago, Illinois, for sightseeing in Lake Michigan’s “Windy City,” then on to Minneapolis, Minnesota—“Land of 10,000 Lakes.” Visit the largest shopping mall in the country, Mall of America, then venture through the farmlands of South Dakota and home of the Sioux Indian Nation. Drive through Fort Pierre National Grassland to see the prairie as it was when thunderous herds of buffalo roamed freely. Visit Badlands National Park, with its dramatic landscape carved by wind and water into steep canyons and towering rock spires amid its vast grasslands. In the Black Hills of South Dakota, visit Mount Rushmore to see the granite monument to four American presidents—Washington, Jefferson, Lincoln, and Roosevelt. Traverse the legendary cattle ranchland and the Bighorn Mountains to Cody, Wyoming—home of Buffalo Bill. Visit Yellowstone National Park with stunning views of Yellowstone Canyon and magnificent Lower Falls in America’s first National Park. Take in the spectacular wilderness in Yellowstone, abundant wildlife, and amazing thermal features, including the famed Old Faithful geyser. Visit the Wild West town of Jackson at the foot of the Grand Tetons, then continue into Utah to visit Salt Lake City. Continue into breathtaking Bryce Canyon and Zion national parks, with sandstone and limestone cliffs of ever-changing colors. Experience one of the Natural Wonders of the World at Grand Canyon National Park in Arizona. Take in the views from the canyon rim, then travel on to Las Vegas, Nevada, for an exciting visit to the “Vegas Strip”—lined with bright lights and casinos. Try your luck at blackjack or the “one-armed bandit” slot machines, then drive through the Mojave Desert and over the San Gabriel Mountains to Los Angeles, California. Enjoy sightseeing in the “The City of Angels,” with a sightseeing tour of Tinseltown’s famous sites in Hollywood and Beverly Hills. From New York to L.A., and the historic frontiers in between, this affordable U.S. vacation is a trip for the history books! 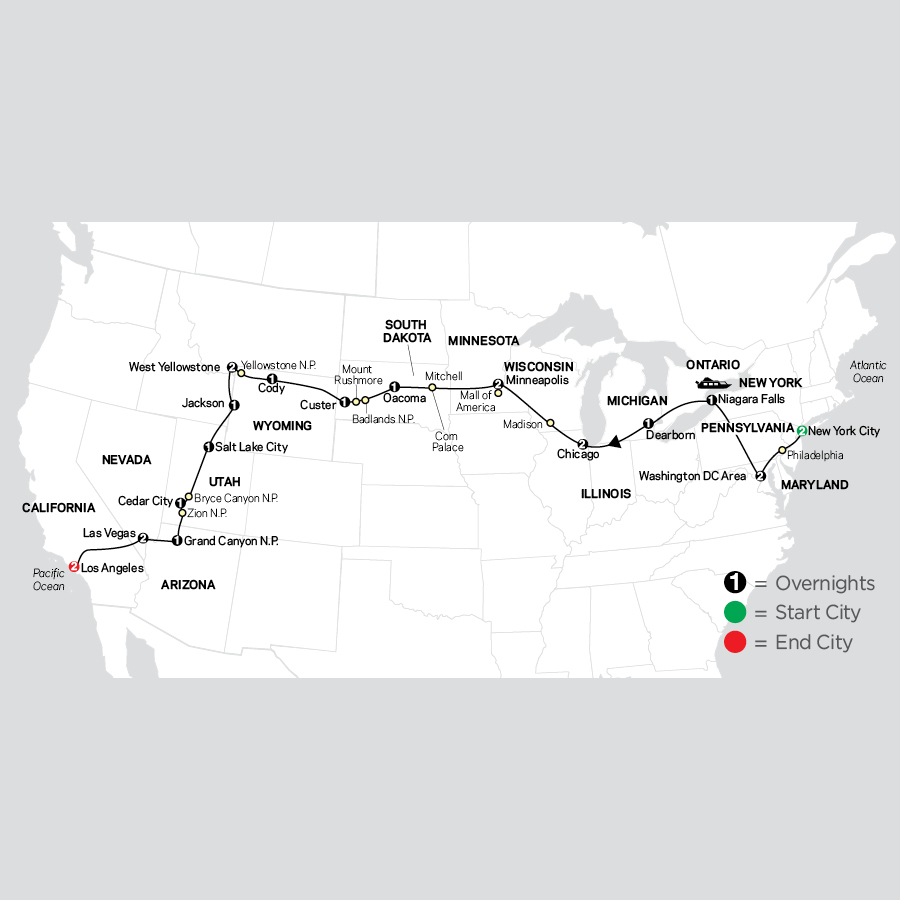 
On vacations that include an overnight stay in Las Vegas, at least one member of the traveling party must be 21 years of age or older. This itinerary enters both the US and Canada. Maximum elevation on tour: 9,900 ft.

NEW YORK CITY Welcome to the “Big Apple!” Your Tour Director is on hand late this afternoon to answer any questions.

NEW YORK CITY–PHILADELPHIA– WASHINGTON DC AREA Head south through New Jersey to Philadelphia, the birthplace of the United States. During your free time, perhaps see Independence Hall and visit the Liberty Bell. On to Washington DC.

WASHINGTON DC AREA See the graves of American heroes, including those of John F. Kennedy and his brother Robert, in beautiful Arlington National Cemetery. The nation’s capital is a sightseeing treasure trove, and your half-day tour with a Local Guide features Capitol Hill, the Lincoln Memorial, the Washington Monument, Arlington National Cemetery, National WWII Memorial, and other well-known sights. Stop for photos at the White House and Capitol Hill. As the remainder of the day is free, why not visit the Smithsonian museums?

WASHINGTON DC–NIAGARA FALLS, CANADA A scenic day as you head north through Pennsylvania Dutch Country, home of the Amish and Mennonite religious sects. Then, along the Susquehanna River to Williamsport, the birthplace of Little League baseball and site of the league’s annual “World Series.” Later, cross the Rainbow Bridge to Canada and arrive at Niagara Falls, Ontario, for your overnight stay.

NIAGARA FALLS, CANADA–DEARBORN This morning, board your Niagara Falls sightseeing cruise for amazing close-up views from the base of the falls. Then, travel the Niagara Parkway, admiring the sweeping landscapes of this scenic countryside. Head southwest and cross the farmlands and vineyards of Ontario, to Dearborn, a suburb of Detroit. NOTE:Operation of the Niagara Falls sightseeing cruise is subject to favorable weather and/or river conditions. If unfavorable conditions exist, a walking tour of the scenic tunnels will be substituted.

DEARBORN–CHICAGO Begin the day with a visit to the Henry Ford Museum. Reach Chicago, America’s third-largest city, in the late afternoon. City sightseeing includes all the major landmarks of the “Windy City.”

CHICAGO Today is free for independent activities. Perhaps take an optional cruise on Lake Michigan and through the locks of the Chicago River.

CHICAGO–MADISON–MINNEAPOLIS First stop today is Madison. A vibrant city, situated between two sparkling lakes. A photo stop at the capitol before making our way to Minnesota—the “Land of 10,000 Lakes.”

MINNEAPOLIS. EXCURSION TO THE MALL OF AMERICA Enjoy an orientation tour of the bustling downtown area of Minneapolis before reaching the Mall of America, the largest shopping mall in the United States, featuring an extensive range of retail, restaurants, and entertainment.

MINNEAPOLIS–MITCHELL–OACOMA Into the rich farmlands of South Dakota, homeland of the great Sioux Indian Nation. Stop in Mitchell to see the Corn Palace, a remarkable Moorish-style building where the interior and exterior are covered with designs of corn outlined with grasses and grain. Stay overnight on the shores of the Missouri River in Oacoma near Chamberlain.

OACOMA–BADLANDS NATIONAL PARK–MOUNT RUSHMORE–CUSTER First, a drive through Fort Pierre National Grassland to see the prairie as it once was when only buffalo and the Sioux Indians occupied the land. Next is Badlands National Park, where 37 million years of wind and water have carved a remarkably colorful sight. Then, head into the Black Hills and behold the granite faces of Mount Rushmore, a giant monument to four American presidents—Washington, Jefferson, Lincoln, and Roosevelt.

CUSTER–CODY Head through the rich, mountainous country past Buffalo, where open-range cattle kings made war on the sheep ranchers of the 1880s. See Sheridan and then ascend into the alpine region of the Bighorn Mountains, and site of the Battle of Tongue River. Overnight in Buffalo Bill’s frontier town of Cody.

CODY–YELLOWSTONE NATIONAL PARK–WEST YELLOWSTONE Travel through Shoshone National Forest to splendid Yellowstone National Park. Follow Grand Loop Road to Artist Point with magnificent views of Yellowstone Canyon and the stupendous Lower Falls, nearly twice the height of Niagara. Yellowstone’s abundant and diverse wildlife are as famous as its geysers. It’s home to hundreds of animal species, including bears, wolves, bison, elk, and antelope. As a visitor to the world’s first national park, you may be lucky enough to encounter some of these amazing creatures in their natural habitat. Overnight in West Yellowstone, gateway to the geysers of Yellowstone National Park.

WEST YELLOWSTONE–JACKSON Travel south into the Wild West town of Jackson. The afternoon and evening are free to explore the shops and museums of historic downtown.

JACKSON–SALT LAKE CITY Today, drive to Salt Lake City, Utah’s vibrant capital. Set on the edge of Great Salt Lake Desert, this center of the Mormon religion is where Brigham Young declared to his followers, “This is the place.” An included sightseeing tour shows you the capital of Utah, including Temple Square, the tabernacle, and the Beehive House.

CEDAR CITY–ZION NATIONAL PARK–GRAND CANYON NATIONAL PARK First stop is Zion National Park, a landscape that was carved out by rushing streams over a period of a million years. Through Kaibab National Forest to the less visited North Rim of Grand Canyon National Park, where you’ll marvel at the stunning views of the flame-colored walls plunging 4,800 feet into the Colorado River. The evening is free.

GRAND CANYON NATIONAL PARK–LAS VEGAS Head to the unique phenomenon of Las Vegas, where today’s fortune hunters try their luck at the 24-hour gambling tables and slots. An orientation tour upon arrival shows off many of the themed casino resorts along the colorful “Strip.”

LAS VEGAS A free day to explore Las Vegas. Your Tour Director can arrange an optional excursion to the Hoover Dam, and will have suggestions for the best shows to see this evening.

LOS ANGELES Start the day with a sightseeing tour of Tinseltown. You’ll drive to Hollywood, and see the footprints of the glamourous stars at the TCL Chinese Theatre, and famous Hollywood Bowl. Then, on to elegant Beverly Hills followed by a drive down the Sunset Strip.

LOS ANGELES Your vacation ends this morning. You can extend your vacation with extra nights and explore L.A. further. 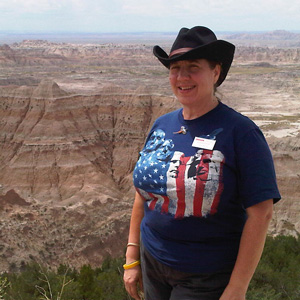